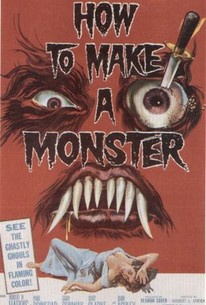 How to Make a Monster Photos

Like many American International films of its era, How to Make a Monster was sold to distributors on the basis of its title alone: only after theatrical play dates had been established did anyone get around to writing a script! Robert H. Harris plays Pete Drummond, who according to the script has been chief makeup man at American-International for 25 years, or approximately 20 years before the studio was actually established. When the studio is sold, Pete is brusquely informed that neither he nor his monster creations -- notably the Teenage Werewolf and Teenage Frankenstein -- will be required any longer, inasmuch as American International is going to concentrate on musicals from now on. Angered and humiliated, Pete takes revenge on the callous studio heads by hypnotizing a couple of actors (Gary Clarke and Gary Conway) into believing that they're genuine monsters. Under Pete's control, the two thespians begin committing murders left and right, wreaking havoc throughout the American International lot. ~ Hal Erickson, Rovi

Paulene Myers
as Millie the Maid
View All

Critic Reviews for How to Make a Monster

There are no critic reviews yet for How to Make a Monster. Keep checking Rotten Tomatoes for updates!

Audience Reviews for How to Make a Monster

How do you make a monster? This movie asks the prop shop of a movie studio. A guy who works on monster movies making the masks, makeup, and costumes should know, right? That's who the movie is about, and he gets made into a monster himself. A pretty cool concept, but the movie could've been better.

Self referential American International Pictures flick. One of several B-movies available on amctv.com. Quite ridiculous how the make-up artist adds some chemical to the foundation he puts on the young men who play the Teenage Werewolf and Teenage Frankenstein, which gives him hypnotic control and allows him to have a few murders committed around the studio lot. This movie has the strange distinction of shifting from black and white to color. Near the end when the make-up artist invites his assistant and the two young actors to his house to show them his gallery/shrine of children/monster masks he has created, I all of a sudden became aware that it was in color. I had to go back a bit to see when it had shifted. Why!? I don't know. It doesn't add much to this low quality picture.

How to Make a Monster Quotes