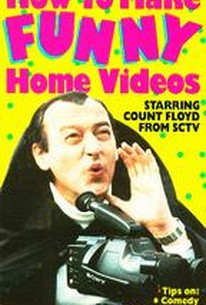 Comedian Joe Flaherty appeared in a number of skits on Canada's SCTV series. Many fans still recall his character the Count, host of the fictitious Monster Chiller Horror Theatre. In this video, Flaherty appears as the Count, telling viewers how to turn mundane home videos into exciting ones by using various special effects, stunts, and sophisticated camera angles. Though this video is intended to help viewers shoot and edit better home movies, it's also designed to provide a look at the silly mistakes people often make when trying to capture special family moments on tape.

Critic Reviews for How to Make Funny Home Videos

There are no critic reviews yet for How to Make Funny Home Videos. Keep checking Rotten Tomatoes for updates!

There are no featured reviews for How to Make Funny Home Videos at this time.