How to Stuff a Wild Bikini1965 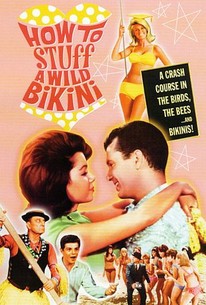 How to Stuff a Wild Bikini Videos

How to Stuff a Wild Bikini Photos

How to Stuff a Wild Bikini is considered to be the strangest of the "Beach Party" movies. Frankie (Frankie Avalon) is off in the navy, serving in the South Pacific, and nervous about all of the guys that will be hitting on Dee Dee (Annette Funicello) back at the beach. He makes a deal with an eccentric white witch doctor (Buster Keaton), who conjures up a woman named Cassandra (Beverly Adam) who is irresistible to all men, and she attracts all of the guys on the beach. But complications ensue when lunatic advertising man Mickey Rooney decides to try and make Cassandra a new national sex symbol, and she gets noticed by nutsy bike gang leader Erik Von Zipper (Harvey Lembeck), who vows to have her. With enough plot complications to rival +A Midsummer Night's Dream, Wild Bikini is laced with satire and some surprisingly good music.

Critic Reviews for How to Stuff a Wild Bikini

The fifth of the [AIP beach movies] in just a 23-month span, and it's not remotely surprising that a long-delayed fatigue kicked in, and hard.

Audience Reviews for How to Stuff a Wild Bikini

Mickey Rooney, Brian Donlevy (Hollywood regulars) and Dwayne Hickman horn in the 60's beach party phenom in this, one of the better of the franchise, but that's not saying much. They do got lotsa dancing bikini babes, which most kinda sums up the main appeal of the entire series. Legitimizing the exploitative ramble ... as always ... Frankie and Annette (thanks for everything, the walking, talking, singing definition of 1960's TV kid, bye darling. 4-10-2013)

Another "Beach" movie with a silly plot that's not that funny. There are some good scenes, but mostly bad ones, plus silly songs. Overall, it's so-so.

How to Stuff a Wild Bikini isn't nearly as good as Beach Blanket Bingo, but still a boat load of fun.

How to Stuff a Wild Bikini Quotes