How to Survive a Plague2012 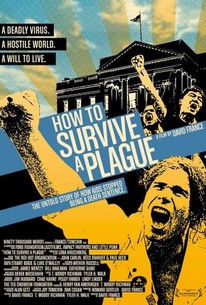 Critics Consensus: Angry, powerful, and stirring, How to Survive a Plague is a brilliantly constructed documentary about the activists who pushed for action to combat the AIDS epidemic.

Critics Consensus: Angry, powerful, and stirring, How to Survive a Plague is a brilliantly constructed documentary about the activists who pushed for action to combat the AIDS epidemic.

Critic Consensus: Angry, powerful, and stirring, How to Survive a Plague is a brilliantly constructed documentary about the activists who pushed for action to combat the AIDS epidemic.

How to Survive a Plague Photos

How to Survive a Plague is the story of two coalitions-ACT UP and TAG (Treatment Action Group)-whose activism and innovation turned AIDS from a death sentence into a manageable condition. Despite having no scientific training, these self-made activists infiltrated the pharmaceutical industry and helped identify promising new drugs, moving them from experimental trials to patients in record time. With unfettered access to a treasure trove of never-before-seen archival footage from the 1980s and '90s, filmmaker David France puts the viewer smack in the middle of the controversial actions, the heated meetings, the heartbreaking failures, and the exultant breakthroughs of heroes in the making. -- (C) Official Site

News & Interviews for How to Survive a Plague

Now Streaming: Pirates of the Caribbean, How to Survive a Plague, And More
Critics Consensus: Trouble with the Curve Is Solid But Predictable

View All How to Survive a Plague News

Critic Reviews for How to Survive a Plague

There are personal glimpses into the home lives of activists that left many in my theater wiping their tears on their coat sleeve.

A compellingly watchable portrait of a battle fought under that most memorable rallying cry: "Silence = Death". Bravo.

This inspirational, unexpectedly hilarious film is a patchwork of archival footage that takes us up to the present day.

This documentary by David France persuasively argues that one of the greatest grassroots activist campaigns of modern times was the Act Up movement ...

David France's documentary about the 1980s/90s American gay community and its leading role in discovering "combination therapy" - the anti-HIV magic bullet - will be inspiring among audiences from the G20.

For anybody who doubts that individuals can combat giant governmental and corporate forces and win, this is a great how-to manual.

An excellent film for both those unfamiliar and gay youth uninitiated with the dark days of the AIDS crisis, and the deadly struggle to speak up or die quietly.

Feels like a far more shallow experience than it really should be.

How to Survive a Plague will leave people feeling hopeful that it can be done sooner rather than later.

One of the most moving scenes in the film is close to the end when we see the survivors in a series of long, silent close-ups, as they are now... jowls, grey hair and aging itself becomes a triumph, as it rarely is on American movie screens.

How to Survive a Plague supplies plenty of moments that are electrifying, inspiring and often both, courtesy of such luminary leaders as Peter Staley and Larry Kramer

Audience Reviews for How to Survive a Plague

An extremely enlightening overview of that which was the most devastating plague that hit the world in the past century, and an essential historical document that shows how activism played the most important role during the acme of the epidemic.

An excellent documentary that effectively conveyed the desperation, fear and power of the gay community during the height of the AIDS epidemic. Really well done.

A topic that should have been more interesting to me... but it was quite hard for my interest to survive this dull documentary - and I usually like documentaries.

"How to Survive a Plague" is a sad, yet uplifting look at the coalitions ACT UP and TAG in the battle against AIDS. This documentary uses archival footage from the 80s and 90s to show the devastating effects of AIDS, and the constant struggle to get better medication to victims. Some of the footage is heartbreaking, some will enrage you, and some will show you that with enough support and enough people pushing for a cause, that anything can happen. AIDS is still prevalent in the world today, but it isn't nearly as destructive as it was, and it's because of the people showcased in this movie. It deserved it's nominated for "Best Documentary" at the Oscars, just as much so as the other 4 nominees. The movie drags a little in the middle, but I think it's because it doesn't have much of a narrative, and relies mostly on old footage to tell the story. Fascinating movie, that shines a light on taboo subject in our world. Definitely worth a watch.

How to Survive a Plague Quotes