How to Talk to Girls at Parties2018 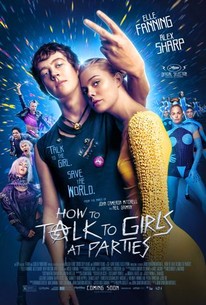 Critics Consensus: How to Talk to Girls at Parties has energy and ambition, but is ultimately too unfocused to do much with either -- or develop its themes into a cohesive whole.

Critics Consensus: How to Talk to Girls at Parties has energy and ambition, but is ultimately too unfocused to do much with either -- or develop its themes into a cohesive whole.

Critic Consensus: How to Talk to Girls at Parties has energy and ambition, but is ultimately too unfocused to do much with either -- or develop its themes into a cohesive whole.

How to Talk to Girls at Parties Videos

How to Talk to Girls at Parties Photos

From the raucous dual imaginations of fantasy laureate Neil Gaiman ("American Gods," CORALINE) and glamrock multihyphenate John Cameron Mitchell (HEDWIG AND THE ANGRY INCH, SHORTBUS) comes the electrifying and singular pop extravaganza film, HOW TO TALK TO GIRLS AT PARTIES. Enn (Alex Sharp) is a shy suburban London teenager in 1977, sneaking out with his best friends to afterhours punk parties. One night they stumble upon a bizarre gathering of sexy teenagers who seem like they are from another planet. In fact, they are from another planet, visiting Earth to complete a mysterious rite of passage. That doesn't stop Enn from falling madly in love with Zan (Elle Fanning), a beautiful and rebellious alien teenager who, despite her allegiance to her strange colony, is fascinated by Enn. Together they embark on a delirious adventure through the kinetic punk rock world of 1970s London, inadvertently setting off a series of events that will lead to the ultimate showdown of punks vs. aliens, and test the limits of how far each of them will go for true love.

News & Interviews for How to Talk to Girls at Parties

View All How to Talk to Girls at Parties News

Critic Reviews for How to Talk to Girls at Parties

Mitchell brings a lively visual sensibility to the screen, so at least it looks stellar. Everything else -- the film's tone, its message, its very purpose -- is caught between two different worlds.

Punk in this film is not angry so much as revolutionary, fueled by ideas and optimism. That may seem like an alien idea today, but Mitchell makes it seem right on time.

If you love "Hedwig" - or "Rocky Horror" for that matter - it's worth streaming when it hits Netflix.

Some musicals are guaranteed audience-pleasers. How to Talk to Girls at Parties is an audience-divider if ever there was one.

When it works, it works. And even when it doesn't, it's just endearing enough to earn a bit of forgiveness for its flaws.

How to Talk to Girls at Parties navigates finding one's true community, literally allowing an alien to try and find a home in a punk human world, and there's familiarity...

The best thing in the pic is mad-eyed Nicole Kidman, as Boadicea, the ur-punk, and the only real rebel in Croydon Town.

All three of John Cameron Mitchell's previous pictures -- Hedwig and the Angry Inch, Shortbus, and Rabbit Hole -- landed on my year-end 10 Best lists, so imagine my disappointment to find that his fourth feature comes nowhere near their heady heights.

Nothing if not eccentric, this singular whimsy is the kind of joint that at first encounter elicits a response somewhere between delight and "Huh?" If you see it now, you can claim discovery rights when it becomes a cult favorite in years to come.

A sci-fi comedy with a love story at the heart sound like a mouthful but if when you're shouting lyrics like 'EAT ME ALIVE' you just join and start screaming those words too. Entertained from start to finish.

Audience Reviews for How to Talk to Girls at Parties

Bizarre is normally enough for me, not so with How to Talk to Girl's at Parties. I appreciate all of the elements in theory, honestly just chuck a couple of punks in lead roles and I can't be too unhappy, but all of these things together, in a Neil Gaiman story, should have been much better... Should have been... Good.

Every now and then there are films that come along and I just can't quite express my feelings towards them. In my opinion, How to Talk to Girls at Parties is a recent release that fits that description. While I definitely enjoyed myself when watching this film, it almost felt like the filmmakers had much more to say than what was literally presented on-screen. There are hidden messages throughout this movie and that's where I find the majority of people who like this movie will be forming their argument from. If you were to sit a thousand hardcore indie film fans in a theatre and have them watch this movie, I can guarantee that roughly 500 of them would either like or love it and the other half may even walk out halfway through its runtime. Without having discussed this film with anyone I know personally, here's why (in theory) I believe this will be viewed as one of the more polarizing indie films of 2018. Following a group of three young men as they stumble upon a seemingly normal party in London, England, they enter to find the exact opposite. Realizing that inhabitants from another world have taken over human bodies, one of these boys, Zan, falls for one of the inhabitants, Enn. This particular portion of the story is what hooked me because their awkward interaction/romance with each other was pretty entertaining to watch grow. What I must warn, however, is the fact that this off-beat romance between Zan and Enn is just about as normal as this film ever becomes. From bizarre costumes, to the extremely bizarre behaviours of some of these clans, to the sheer visual being incredibly out there, I felt like I was watching a solid romance, wrapped in a weird world that was trying to be far more than it had the right to be, concluding on a note that both satisfied me and left me wondering why it went in the direction that it did. This is a very hard film to recommend to anyone really, because you'll either embrace the weirdness that this film possesses from start to finish or you'll be turned off by the very first sequence. For fans of quirky indies, this movie may just be the film that you've been waiting for, but I can't say that about the movie as a whole. The chemistry between Elle Fanning and Alex Sharp was easily the highlight of this movie because it would've fallen apart if that aspect of the movie didn't work. Honestly, anytime this film deviated from that aspects, I was either wishing they would come back on-screen immediately or I was simply hoping for a little more depth into this alien world. The romance aspect of this film drives the story forward, but the underlying notion that an alien race has been living among us isn't explored enough in my opinion. It has a solid payoff in the final few moments, but I was left wanting so much more from it. How to Talk to Girls at Parties reaches for the stars in certain moments and, quite frankly, asks a few more questions than it answers, but I was able to forgive that in exchange for the core premise following Zan and Enn. The visual style was unique and the story itself held my interest throughout the majority of the movie, but I wouldn't expect to be blown away by a wonderful payoff. It's a bizarre movie that I had a decent time watching. As far as a final recommendation goes, I would simply recommend checking it out at your own risk, after checking out the trailer and assessing for yourself.

How to Talk to Girls at Parties Quotes