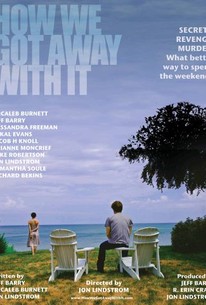 How We Got Away With It Photos

Released from jail just before the arrival of his friends for their annual reunion, Henry (McCaleb Burnett) discovers a shocking tragedy. Driven by revenge, his rash and unpredictable response sets in motion a chain of events that will reveal his darkest secrets, resulting in revenge and murder that will forever change the course of everyone's lives, sweeping up the innocent and threatening to destroy them all. Forced to withhold his plan from his lover (Cassandra Freeman), enlist his best friend's help (Jeff Barry) and dogged by a local cop (Jon Lindstrom), Henry battles to survive in this gripping, taut and explosive thriller. Filmed entirely on location in Rochester, NY. (C) Official Site

Richard Bekins
as Walter
View All

Critic Reviews for How We Got Away With It

Lindstrom draws effective, understated performances from his cast, letting insecurities and betrayals break through the surface of laid-back celebration.

It's surprising that a screenplay conceived by three veteran actors would allow so little character development.

Indie murder story showcases a good feature directing debut, despite having an overabundance of ill-used characters and little chemistry among the cast.

More approachable as a clinical deconstruction than a conventional narrative.

There are no featured reviews for How We Got Away With It at this time.

How We Got Away With It Quotes