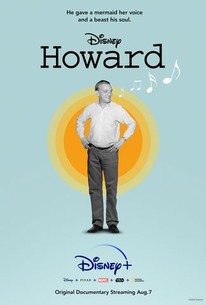 Critics Consensus: Howard serves as a bittersweet tribute to the life and legacy of a brilliant artist whose timeless songs served as the soundtrack for a generation of Disney fans.

Critics Consensus: Howard serves as a bittersweet tribute to the life and legacy of a brilliant artist whose timeless songs served as the soundtrack for a generation of Disney fans.

Critic Consensus: Howard serves as a bittersweet tribute to the life and legacy of a brilliant artist whose timeless songs served as the soundtrack for a generation of Disney fans.

Directed by Don Hahn ("Beauty and the Beast"), "Howard" is the untold story of Howard Ashman, the brilliant lyricist behind Disney classics like "Aladdin," "Beauty and the Beast," "The Little Mermaid" and creator of musicals including "Little Shop of Horrors." Featuring never-before-seen archival footage, personal films and photographs, as well as interviews with Howard's friends and family, the film is an intimate look at the Disney Legend's life, his creative drive, and the process behind the music. Spanning his childhood in Baltimore, to his formative years in New York, and his untimely death due to AIDS, "Howard" goes in-depth to explore his journey to become the lyricist behind some of the most beloved and well-known classic family films in the world.

I thought [director] Don Hahn did a beautiful job. You could really feel his affection for Howard. It's a moving and richly layered portrait.

Mostly it will just make you hungry to revisit Ashman's work. That's perhaps not the intended result of this fond tribute/merely serviceable survey of a too-short career - but it's not necessarily a bad one.

If Hahn's filmmaking struggles to replicate the whimsical creativity of his subject, Ashman's genius shines through anyway.

There's little here that couldn't be divined from Ashman's Wikipedia article and it seems a shame that someone responsible for four such extraordinary movies should be given such an unremarkable cinematic biography.

"Howard" serves as a fitting celebration of that life and career. It's a chance for those who knew him to pause and fondly look back, in a way that merely adds to an appreciation of the parade that he helped start.

Howard delivers a feast for the eyes and ears.

Covers Ashman's life and work in a generally Wikipedia-like way that does not measure up to the man's stature.

Musical comedy buffs will know the name and be eager to see this faithful, if not particularly innovative, rendering of [Howard Ashman's] life.

Anyone with a love of movie musicals, particularly the animated renaissance begun by Disney's The Little Mermaid, will want to watch the documentary feature Howard.

It's hard to imagine anyone other than Don Hahn making this film.

Disney no doubt added the documentary film, Howard, to their streaming service due to Howard Ashman's hand in making Disney Animation what it is today.

There are no featured reviews for Howard at this time.