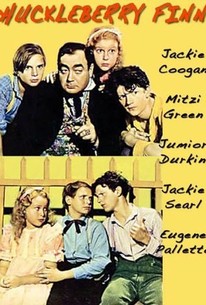 Based on the novel by Mark Twain, Huckleberry Finn stars Junior Durkin in the title role, Jackie Coogan as Tom Sawyer, Mitzi Green as Becky Thatcher and Clarence Muse as Jim the slave. The film hopscotches around the book, ignoring such highlights as the Grangeford-Shepherdson feud and devoting too much time to such minor incidents as Huck and Tom's "orchestrated" rescue of Jim. The basic storyline begins when Huck's no-good Pap (Warner Richmond) kidnaps the boy from his guardian, the Widow Douglas. Huck stages his own "death" and escapes down the Mississippi on a raft, in the company of Tom Sawyer and escaped slave Jim. The threesome link up with two confidence men, the King (Oscar Apfel) and the Duke (Eugene Pallette). The unscrupulous pair plan fleece the grieving family of a recently deceased man of wealth, but Huck falls in love with one of the victims of the scam (Charlotte Henry) and thwarts the villains. Huckleberry Finn was Paramount's followup to 1930's Tom Sawyer, with many of the principal actors repeating their roles. This 1931 version of Huckleberry is easy to take, but somewhat threadbare when compared to later remakes. ~ Hal Erickson, Rovi

Eugene Pallette
as Duke of Bilgewater

It is an offering which will be heartily welcomed, in spite of changes due to the demands of the screen, by all admirers of the great [Mark Twain].

Director Taurog, while he retains many of the happiest Twain inventions, gives them a less sharply human inflection.

The dialogue between the two friends is always interesting and it is also also at times decidedly amusing,

Young Durkin is admirably naive and boyish as the hero, and Jackie Coogan, though he is apt to shout his lines, is also well in character as his friend.

It has a plot In the happiest mood of the great national humorist, and what was left undone originally has been perfected for screen purposes by the pens of Grover Jones and William Slavens McNutt.

There are no featured reviews for Huckleberry Finn at this time.