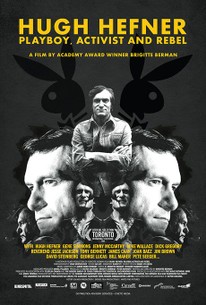 An intimate look at the outspoken, flamboyant founder of the Playboy empire. With humor and insight, the film captures Hefner's fierce battles with the government, the religious right and militant feminists. Rare footage and compelling interviews with a remarkable who's who of 20th Century American pop culture, present a brilliant and entertaining snapshot of the life of an extraordinary man and the controversies that surrounded him. -- (C) Phase 4

A seamless, eye-opening entertainment about the civil rights activist side of the Playboy publisher.

There are few people who can be credited with affecting real or lasting change in our culture. One of them is Hugh Hefner, an aspiring cartoonist who borrowed money to put...

Even after 124 minutes of praise he still seems like a sad bastard.

This is not a probing examination of Hef in all his complexity.

This eye-opening documentary reveals the mensch beneath the moolah, the ardent social reformer beneath the paisley-patterned shirts.

The film humanizes Hefner in a way no one has attempted to do before on the big screen.

More of a pat on the back than a true examination of the man inside the robe.

Definitely worth a look.

The Playboy empire unabashedly lined up with liberal causes, bringing messages of racial tolerance, resistance to the military-industrial complex, and anti-Puritanism into bedrooms all over America.

To put it mildly, the doc is way more than just T&A , Bunnies and centerfolds. Although there's some of that too.

Those who consider Hefner a man who made fortunes by exploiting women in his magazine should find no reason to change their minds after watching this fascinating, illuminating document of America during a time of profound change.

A well-done story that reveals more about Hefner than most of us knew.

Far more than boobs and bunny tails Hefner has made a significant sociopolitical contribution to America. An education - I highly recommend it.