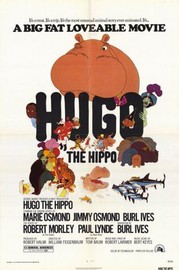 Jimmy M
August 19, 2017
Not all animated films need to follow the standards set by Laika, Disney, Pixar, Aardman and Ghibli to be great
There are times an animated film can be great on it's own terms like Moomins on the Riviera and Mark Osborne's The Little Prince for example

Hugo The Hippo is a film is a film i like to call "So campy, It's great"
There are elements of camp like the OST comprising of tunes mostly sung by Jimmy Osmond, Marie Osmond and Burl Ives and of course, Paul Lynde's recognizably camp voice being used as the voice of the film's evil vizier, Aban-Khan
but however what make the film stands out is the animation and the visuals itself

Sure, The plot is a bit murky at times because of the song numbers but the soundtrack add to the charm
While this can be compared to say "Yellow Submarine" because of the trippy visual aspect but the film is great on it's own and i highly suggest y'all see this film... it's really good

Matthew Z
½ September 7, 2011
I can imagine that a great many drugs were consumed during the creation of this film, so I would expect that it is comprehensible only when utterly baked. As a child we had the scholastic book, published in 1976, and it was pretty strange, but the film is truly one of the most bizarre things that I've ever seen. Hearing Paul Lynde utter the line "In the name of Allah, what are you doing?" is a totally surreal experience, and I would ask the filmmakers the same question...

If you like bad movies, then this is a film for you. It's pretty spectacular... from the monkeys playing cabbage basketball over the Harlem Globetrotters' signature tune "Sweet Georgia Brown", to the attack of the killer asparagus, to sharks in leather-bar drag, to the young titular hippo witnessing the massacre (seriously) of his entire tribe, including his parents, it's hard to over-emphasize this film's cruelty, unfortunate racial stereotypes and bizarre visual style.

Then there's the music! Burl Ives cheerful song about Hugo's imminent starvation is one thing, but it's almost impossible to listen to Marie Osmond's opening song without collapsing with laughter, disbelief, or both:

Do you know the way to tell a story that's true
From the stories that never took place?
Well, when a story's so strange that if it never happened
No one could ever think it up
Then it is true

Kati A
½ April 26, 2011
I saw the Hungarian version and while it was indeed weird to see how the voice actors features were seeping into the character design, I found the movie rather interesting and deep. While at first the darkness and design style (yeah yeah yellow submarine) is daunting the storyline engulfs you. The moral message is strong and it leaves an impact on young children. The animation itself is not brilliant but the character designs are interesting. The fantasy scenes are engaging and the songs...Well the songs are American, and that is certainly out of place in an African-themed movie. Also there are obvious Asian design elements that are rather strange. But above and all I found it a beautiful piece.
Page 1 of 1