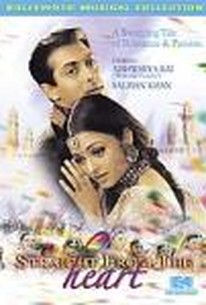 Romantic misunderstandings, unrequited love, and the gap between two very different cultures provide the backdrop for this romantic musical comedy from India. Sameer (Salman Khan) is a gifted singer from Europe who has come to New Delhi to study Indian vocal techniques with Pandit Darbar (Vikram Gokhale). Darbar's beautiful daughter Nandini (Aishwarya Rai) makes a strong impression on Sameer, and soon he's head over heels in love. But everyone advises Sameer to stay away from the girl, and Nandini is set up in a marriage with Vanraj (Ajay Devgan), a successful lawyer. But Nandini isn't happy with her new husband, and Vanraj soon finds evidence that his wife has been corresponding with Sameer, who has since returned to Europe. A jealous Vanraj packs his bags and sets out to find the singer, wanting to know the nature of the relationship between him and Nandini. With top "Bollywood" star Salman Khan in the lead, Hum Dil De Chuke Sanam was a major box-office success in India, and was enthusiastically received in screenings at the 2000 Vancouver Film Festival and 2000 Seattle Film Festival. ~ Mark Deming, Rovi

Aishwarya Rai, in a luminous, award-winning performance, fills in the conflicted emotional shades that her leading man fails to bring.

It was okay. I sorta wish her husband was more like Rhett from "Gone With The Wind" and would have told her that he really didn't care. When her lover left she was ready to kill herself and then in a couple of days it all goes away?

A truly remarkable movie! Salman Khan and Aishwarya Rai are a great pair, and they interact well in this movie. Their characters relate to the deepest sense of "unrequited love." This movie is filled with hilarity, tons of humor, and of course the emotional rollercoaster. A great movie indeed.