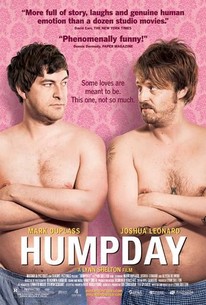 Critics Consensus: Observant and insightful, this indie comedy takes a different tack on the "bromance" but still makes a point without sermonizing.

Critics Consensus: Observant and insightful, this indie comedy takes a different tack on the "bromance" but still makes a point without sermonizing.

Critic Consensus: Observant and insightful, this indie comedy takes a different tack on the "bromance" but still makes a point without sermonizing.

OLIVIA
as Girl on Bike

Stellan Matheisen
as Boy on Bike

Where Humpday really excels is in its depiction of Ben and Andrew's relationship. After so many years apart, they speak easily and candidly to one another...

One could only feel sorry for Alycia Delmore as the pliant wife of the silly husband, who goes along with his irritatingly neurotic friend's idea.

What could have ended up as crass, cringy and possibly offensive actually results in a very funny and realistic treatment of the premise.

What finally lifts 'Humpday' above macho junk like 'The Hangover' is its all-inclusive warmth: for all their adolescent self-delusion, Shelton truly loves these characters. And after 90 minutes, so will you.

Humpday is a high-concept comedy made for low-budget money that might just be one of the funniest films of the year.

The ending of the movie is an awful let-down, which is a shame: the film had been weirdly involving and Alycia Delmore is good as Ben's outraged wife.

At the end of the day, boys will boys and bros will be bros. And Humpday will make your day - with laughter.

... unfortunately ends up being unmemorable. [Full review in Spanish]

To director Lynne Shelton's considerable credit, Humpday delineates that perennially privileged, and thus imperiled, domain of male intimacy with a subtlety that echoes the ambivalence of sexual self-realization.

Humpday works because... its moments of truth and familiarity aren't isolated.

It's a comedy that grows beyond any Apatovian expectations and expertly avoids being an ode to 'Gay panic' a'la I Now Pronounce You Chuck and Larry.

After a drunken dare two male friends, one of whom is married, agree to shoot a sex scene together. The first scene with Ben and Anna lying in bed is almost perfect exposition. In fact, the entire first act is well-written and strongly acted. The characters' relationships are clearly set up, and the plot unfolds organically. Humpday feels like an improvised film, and though there's a certain verisimilitude to this style, I longed for a control over the language. Also, the plot between Ben and his wife never reaches a real finish. Her third act decision is not the end of the conflict, and I think the film should have found a way to resolve her storyline. Overall, there's a lot of good work in Humpday, a strong but flawed film. Ov

Andrew: That's the tricky thing. It's the difference between this and bungee jumping, is that bungee jumping, you just walk to the edge and jump...  "Some loves are meant to be. This one, not so much." I really enjoyed Humpday a lot. I should say I love these indie comedies and the mumblecore genre in particular. Humpday is one of the best you could hope to see. The clear improvisation is highly impressive. I sensed times when Alycia Delmore didn't quite know what do to, but other than that, the conversation scenes are incredibly well done. Another thing I have to say is that about 80% of the laughs that come out with this film are the result of awkwardness. If awkward humor isn' your thing; I wouldn't suggest watching this one. A lot of the humor is in moments when we sense the awkwardness between characters. I absolutely love awkwardness in comedies, so that just helped me enjoy the film all the more. I can understand Humpday not being for everyone. It could be considered to talky, but that's all mumblecore really is. It could also be viewed from the heavily conservative side as racy stuff. There's a lot of elements that could detour your enjoyment of the film, but if you can take satisfaction out of everything the movie employs, you will not be disappointed. Now to the plot. Ben is married man, who is also trying to conceive a child. His longtime friend, Andrew walks into his life after not seeing him for years. After a night of drinking with some highly "hippish" people who were constantly talking about Humpfeast, which is a big porn festival; Andrew and Ben come up with the great idea to do a sex scene together. As the time gets closer, it obviously gets more awkward. The awkwarder the better in my opinion. This is a movie that could be viewed as trash by anyone who just looks at the surface story. From that view, all it is is an experimentation by two men, that has no real value. But if you look to the inner messages and it's views on friendship; you'll be able to get a lot more out of it. This isn't a film I would necessarily recommend to people I know. There are some people that just wouldn't give a movie with a plot like this even a chance. If you can put the plot synopsis behind you, I think you would really be surprised by the outcome. Maybe you'd even like if, as I did.

Okay, if you're like a friend of mine, who finds scenes of extreme awkwardness so uncomfortable that you're not even willing to sit through them (squirming), then stay well away from this film. If however, you're like me, and willing to laugh at the holes that machismo can sometimes dig for itself, you'll laugh your ass off. Which is what I did. I guess I see something of myself in the speech patterns, vocabulary and points of views of these characters, and I can completely root for these two confused jackasses. While they're drunk at a party, they decide to enter an amateur porn competition, and they hang onto the idea once they sober up the next day. Their pact to screw each other on camera becomes a dumbass game of pseudo-intellectual sexual chicken. They end up investing way too much of their identities in their pact, despite the fact that they both have real, actual and valid reasons to go through with it. Ben wants to prove to himself that he's not the button-down domestic prude that he looks like, and Andrew wants to prove to himself that he's the Bohemian artist that he believes himself to be. But despite their platonic closeness and their obvious brotherly love for each other, they have to struggle to find some way to overcome their biggest hurdle: namely, neither of them are the slightest bit gay. This movie is such a scream. It's not often that a pair has to have impossible sex to save the friendship, but here we are. Man, I love this movie so much.

Worthy if minor indie love-in which runs out of steam when you realise where its going and I never really bought the contrived set up.