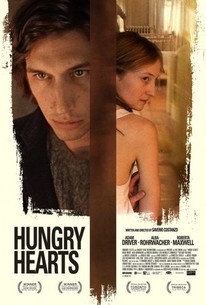 New York City newlyweds Jude and Mina have a seemingly perfect relationship. But things take an unsettling turn with the birth of their son. Convinced that the baby must be kept free of all contaminants, Mina develops fanatical obsessions with veganism, cleanliness, and purity that may kill the child unless Jude can stop her. This intense psychological drama suggests that sometimes a parent's love can be the scariest thing of all. (C) IFC Films

Rohrwacher, meanwhile, is superb as Mina, in a role that couldn't be drawn less sympathetically.

A strange, harrowing, often remarkable story of love and obsession.

Hungry Hearts is a troubled, troubling movie. The unrest it creates looms long after the end credits have rolled.

A better name for this movie would maybe be "The Ghastly Ones."

A robust thriller with a questionable, although intriguing, commentary on motherhood and mental illness.

Mr. Costanzo's attempt at rendering the fraying of minds and marital bonds draws on notions of hysteria that only shortchange his characters.

The momentum of the character arcs drags at one or two key moments, but this is a remarkably even-handed and tense portrayal of a family caught between love and logic.

This head-scratcher will forever remain an enigma, or just be forgotten by dinner time.

Hungry Hearts draws superb performances from both Driver and Rohrwacher, though the latter is burdened with becoming increasingly hateful as the story progresses.

It is not easy to swallow, but it definitely has something to say: Go a bit easier on your mothers.

Hungry Hearts scales its greatest heights when playing to the inconceivable and unsolvable.

Saverio Costanzo's Hungry Hearts has so much potential, and goes sideways so quickly. It's a frustrating waste.

"Hungry Hearts" is a completely Italian film. The director is Saverio Costanza, a director who has formally only worked on Italian ventures. The screenplay was based on a book of the same name by Marco Franzoso. The film was repeatedly nominated for Italian awards, including winning the Volpi Cup at the Venice Film festival, for both Best Actor and Actress respectively. The film feels tense throughout, echoing some bits of Italian neorealism, as well as the European art-cinema of the fifties and sixties. It speaks to the realism of mothers who try their best, but in the end do badly by their children, and the horror of a father's powerlessness in the face of the family courts. If you watch this film for any one reason, let it be the eerie feeling of moody tension between the two leads throughout the film. It starts very innocently, having our two leads engage in a meet cute that is anything but, while trapped in a Chinese restaurant's bathroom. We watch their relationship progress throughout the film, from courtship, to sex, to marriage, and finally the birth of their son. Throughout her pregnancy Mina (Rohrwacher) is upset about the fate of her child. A psychic tells her she is having an Indigo Child and she believes it. She worries for the fate of the infant, and seemingly knows more than everyone, though everyone tells her she could be endangering the child's life. It's a very edgy movie, from beginning to end, culminating in tragedy. The performances themselves are good. Rohrwacher is chillingly gaunt and timid throughout, and her calm demeanor often makes you uneasy. Driver has a strange sincerity and truth in his turn as the father, both frightened for the well-being of his son, and of his wife, and the power she exerts in their relationship. Though the characters themselves don't always say and do interesting things, they stand, or move in such alien, interesting ways that your eye watches them more often than not. Though there's a dominant theme of motherly love turned vile, the ending leaves things weirdly unsaid and tangled. It's unclear exactly what was going on with Mina, and what her psychiatric diagnosis might be. Not to give anything away, but things are left open ended, which doesn't feel right when the entire film seems to be building towards something greater than itself. Overall it's a good social problem film, because it speaks to the lack of legal rights that fathers have for their own children, but it doesn't do a decent job of being a psychological thriller, or mystery. If this was more geared towards being a character study of Mina, and her strange past, I think it would have strengthened the ending.

An anguishing and extremely unsettling story that becomes more and more like a horror movie (with some nice use of ultra wide-angle lenses) as we witness a desperate man trying to prevent a newborn child from getting hurt by a foolish woman who is completely out of her mind.