The Hunt for Red October1990 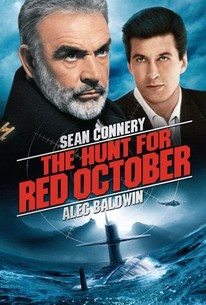 Critics Consensus: Perfectly cast and packed with suspense, The Hunt for Red October is an old-fashioned submarine thriller with plenty of firepower to spare.

Critics Consensus: Perfectly cast and packed with suspense, The Hunt for Red October is an old-fashioned submarine thriller with plenty of firepower to spare.

Critic Consensus: Perfectly cast and packed with suspense, The Hunt for Red October is an old-fashioned submarine thriller with plenty of firepower to spare.

The Hunt for Red October Videos

The Hunt for Red October Photos

The first of several films based on Tom Clancy's "Jack Ryan" technothrillers, Hunt for Red October stars Alec Baldwin as eccentric CIA analyst Ryan and Sean Connery as Soviet submarine commander Marko Ramius. Ramius sets the plot in motion when he murders his political adviser, burns his orders, and steers his sub Red October towards American waters, hoping to defect. The CIA, aware that the Red October was about to embark on an evasive mission to demonstrate its ability to avoid detection and fire its nuclear missiles upon U.S. installations, believes that Ramius is insane, and that he plans to start World War III. To cover their own behinds, the Russians back up the CIA's suspicion. Only Jack Ryan believes that Ramius' mission is not as apocalyptic as it seems -- and it is Ryan who is assigned to infiltrate the Red October to prove his theory. The sort of film that in an earlier era would have been called a "thinking man's thriller," The Hunt for Red October ushered in a new series of Hollywood-produced post-Cold War adventure films, including 1995's Crimson Tide. ~ Hal Erickson, Rovi

Courtney B. Vance
as Seaman Jones

Larry Ferguson
as Chief of the Boat

F.J. O'Neil
as General at Briefing

Critic Reviews for The Hunt for Red October

If you liked the Cold War, you'll love The Hunt for Red October.

Coupled with Connery's magnetic performance, that's enough to make The Hunt for Red October as watchable today as it was during its 1990 release.

Clancy is known for writing difficult books, but the movie makes plausible a preposterous situation because of Baldwin's convincing, low-key approach to being a film hero.

You may not be limp from accumulated tension when this hunt is over, but its cautiously upbeat global message leaves a satisfying glow and it operates with a crackerjack premise.

An exciting techno-suspense thriller with a hollow center.

Though Hunt shows fitful signs of life, it lacks the human drama of Das Boot, the technical dazzle of The Abyss and the old-fashioned brio of Run Silent, Run Deep.

...The Hunt for Red October still makes sense in a Boys' Own way even if the hopeful world described has long vanished...

With enough of a corkscrew plot to keep anyone guessing and with plenty of edge-of-your-seat suspense, this high-stakes espionage thriller never misses a beat.

With a chilly majesty to its scale despite its confined locations, this is a supremely confident film with the courage of its convictions as the story slowly and steadily unfolds. 30 years on it still packs a powerful punch, the tension ratcheting.

It's to McTiernan's credit that so much of this is made intense. Every silence on board the Russian sub, whether they're squeaking through a narrow underwater canyon or sending out a single sonar ping, seems occasion to hold your breath.

the kind of action thriller that is rarely made today-one that emphasizes intellect and logic, intuition and political maneuvering over might and brawn

The Hunt for Red October is a happy cinematic event, the first motion picture that allows us to experience the sweaty-palm thrills of the Cold War without worrying that the world will blow up this year.

Audience Reviews for The Hunt for Red October

It bogs down in the technical stuff in its second half, but it's still a competent Cold War classic from the director of Die Hard, (who also directed duds like The 13th Warrior and The Thomas Crown Affair, but I digress). I enjoyed learning that Alec Baldwin and Sam Neill weren't always middle-aged, and I especially appreciated that the Russians didn't have ridiculous accents (the film uses a zoom to switch from subtitled Russian to English, letting you in to the artifice). It's overly long and a bit mechanical, but this big-budget game of Battleship compares favourably to a lot of similar films.

Captain Ramius: You're afraid of our fleet. Well, you should be. Personally, I'd give us one chance in three. More tea anyone?  "Invisible. Silent. Stolen." The Hunt for Red October is a film that deserves its classification as a thriller. There isn't a lull in the 2 hour plus runtime. It's a nonstop thrilling ride beneath the sea. Part of the reason the movie works so well is because of an extraordinary cast of Sean Connery, Alec Baldwin, James Earle Jones, Sam Neill and Tim Curry. There's a bunch of great character actors in there too, that I know by their face, but if asked I couldn't tell you their names.  Red October is the name of a Russian sub, which is the command of Captain Ramius. Under his command the sub defects and makes its way towards the United States. The plot has many turns and what you expect isn't always what you get. Sean Connery makes this movie with his terrific veteran presence. Every time I watch a movie with him in it; I am always stunned by how convincing the guy is onscreen. Alec Baldwin isn't one of my favorite actors, but he is pretty good as the hero. This is a thriller that doesn't rely to much on action. There are long sequences where the excitement comes from listening to the characters talk instead of watching them run and shoot. Its a smart, well paced, cool film that I liked immensely. I'll take this over Die Hard any day.

Based on Tom Clancy's debut novel, The Hunt For Red October. This film is about a new type of Russian typhoon class submarine, being chased across the seas when the crew decides to defect to the Americans. This typhoon class submarine is named the Red October and the Russians have installed a secret propulsion system that could render the sub nearly silent to sonar. The thrills are nonstop, the story is top notch and is guaranteed to keep you on the edge of your seat. Alec Baldwin and Sean Connery deliver strong performances. The Hunt For Red October is one of the best films adapted from a Tom Clancy novel. This film is brilliant with great directing, pacing and acting. The Hunt For Red October is a different type of submarine film thats very enjoyable, despite the fact it's very different from previous films in the sub genre. This isn't a war film, this is more of a suspense / Thriller film and it delivers on both. For those who have read the book, they will be pleased to know that this film was very well adapted and the filmmakers stayed through enough to the source material. John McTiernan delivers a solid piece of cinema, and The Hunt For Red October is one of his best films since Die Hard. A superbly crafted thriller, The Hunt For Red October is a film that Tom Clancy fans will thoroughly enjoy, and as a person who's read Clancy's book, I can honestly say that the filmmakers did a terrific job at adapting this electrifying story.

The Hunt for Red October Quotes