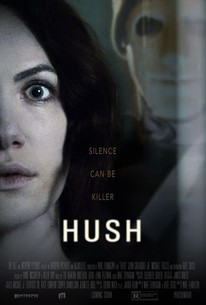 In this heart-pounding thriller from acclaimed writer and director Mike Flanagan (Oculus, Before I Wake), silence takes on a terrifying new dimension for a young woman living along in the woods. Author Maddie Young (Kate Siegel) lives a life of utter isolation after losing her hearing as a teenager. She's retreated form society, living in seclusion and existing in a completely silent world. But one night, the fragile world is shattered when the masked face of a psychotic killer appears in her window. Without another living soul for miles, and with no way to call for help, it appears that Maddie is at the killer's mercy... but he may have underestimated his prey. As this horrifying game of cat and mouse escalates to a breathless fever- pitch, Maddie must push herself beyond her mental and physical limits in order to survive the night.

Once the premise kicks into high gear, Hush reveals itself as a finely craved one-trick pony.

An effectively straightforward exercise in suspense, one that further positions Flanagan-who also made the year's well-received Ouija prequel-as a filmmaker with a strong grasp on horror's fundamentals.

It's a sharp, finely tuned thriller that goes down familiar paths but with flair and skill. Flanagan doesn't hold back on the gore, but he doesn't rely on it.

Flanagan's taut direction reinforces his rep as an up-and-comer we will hopefully be hearing much more from.

Hush has a solid first half before the cat-and-mouse shenanigans begin to seem repetitive and prolonged. Still, at 82 minutes Hush is a concise and well-executed horror nightmare.

It's a terrific modern slasher, and even got the seal of approval from Stephen King.

It [had] really a nice production work and I wouldn't be mad if I went and saw this at the cinemas. I don't think it's a bad film at all, I just don't think other than those key aspects, there's a lot going on.

HUSH places you into a horror film unlike any other. On paper, it's a slightly typical "stalker outside the house" flick, but it combines an invasion-thriller with a slasher edge so frightening well.

I... spent the full two hours in seat-clutching terror.

Nothing makes me happier than a bit of originality in a film style normally filled with clichés.

Hush is probably the best home invasion film since Adam Wingard's You're Next.

Absolutely terrifying, Hush is an intense and frightening indie horror thriller. The story follows a deaf woman who lives in a secluded house in the woods, and is preyed upon by a psychopathic killer. The script is especially well-written, doing an impressive job at having the character work her way through the problems that she faces. And, making the character deaf gives a fresh new angle to the classic cabin in the woods scenario; heightening the tension and suspense. Lead actress Kate Siegel gives an incredibly visceral performance that captures the raw terror and desperation of the character, and director Mike Flanagan does a good job at showing how trapped and isolated she is. Additionally, the violence is remarkably gritty without being gratuitous. A well-crafted horror film, Hush taps into our primal fears.

It's what it says on the tin. A standard stalk prey kinda scenario. ð???

I cannot see what the fuss about this is. Utterly conventional home invasion thriller, plodding predictably towards the inevitable ending (helpful corkscrew at fingertips as final strangulation begins). A dull, mostly incompetent antagonist running in circles around a house apparently fully glazed with safety glass and with no particular geography. And unlike the recent, excellent 'Don;t Breathe' the heroin's deaf-muteness does abolutely nothing to advance the plot of complicate the circumstance beyond making her slightly more vulnerable than she would be, completely alone in an isolated location with a murderer. Stylistically dull, by-the-numbers, and the only tension comes from yelling 'Oh why the f**k did you do that?!' at the screen. Plus a ludicrous 'inner voice' sequence that does nothing but add pointless exposition to an already obvious situation.

Flanagan continues to prove after his excellent Oculus that he is one of the most interesting names in recent years when it comes to genuine horror, with another smart, well-directed and tense movie that does have a few clichés here and there but works quite well all the same.