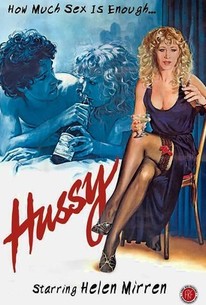 Matthew Chapman wrote and directed this hackneyed love story with Helen Mirren as Beaty, a nightclub hostess who turns tricks. Emory (John Shea) is an expatriate American who works the lights at Beaty's nightclub and is in love with her. But Beaty cannot deal in flowery sentiment, especially since she needs money, not romance, to support her young son. But Emory sees a way to attain money and romance -- he plans to execute a drug deal with his low-life partner and use the proceeds to take Beaty and her son away from the degenerate surroundings and into the light-of-day in the English countryside. But unfortunately, things do not go as planned. ~ Paul Brenner, Rovi

If you can ignore the hideous 70's décor, music and attitudes, it's a powerful little B movie that's worth braving the ignominy of having Hussy on your search history...

There are no featured reviews for Hussy at this time.