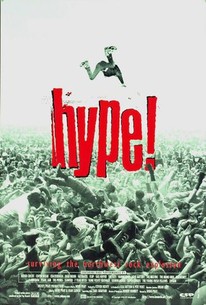 Doug Pray's entertaining and opinionated documentary on the Seattle music scene takes the (admittedly unusual) position that the Grunge Explosion of the mid-1990s was the worst thing to happen to rock music in the Pacific Northwest. Hype! depicts Seattle as a town where a fertile musical community with a distinctive sound and style grew largely because it was ignored by the rest of the world. Once the unexpected success of Nirvana, Pearl Jam, and Soundgarden made Seattle the rock capital of the world, drugs took hold, opportunists scrambled for the spotlight, and cheap flannel shirts became "grunge fashion." The movie features revealing (and often hilarious) interviews with members of such groups as Mudhoney, the Mono Men, the Fastbacks, Seven Year Bitch, Tad, Girl Trouble, Gas Huffer, Dead Moon, and the Supersuckers, as well as performance footage of all these bands and informed perspectives from a number of behind-the-scenes figures. It also features a technically shaky but historically priceless clip of Nirvana's first public performance of "Smells Like Teen Spirit".

Some Velvet Sidewalk
View All

The first-time director, Doug Pray, doesn't linger long on anything, but the movie is so crisply and intelligently edited that you never feel you're being rushed through it.

Hype! is a smart look at an important musical event that featured a lot of great music almost as a by-product.

The film makers themselves don't seem to understand the deep cultural resonances created by this hype. Worse, they endorse the selfishness of the Seattle-ites who, apparently, want all this good stuff for themselves.

Between these lulls is a compact, interesting chronicle of an extraordinarily fertile local music community and what happens when its talent becomes a worldwide commodity overnight.

Hype wants you to think that a few interviews with some less popular bands and some poorly shot concert footage lend the film an insider legitimacy and credibility that excuse it from the same accountability it demands from other media.

The movie depicts a Seattle that is a good deal more complex -- and fun -- than the one that survives in most media overviews, a welcome antidote to woe-is-Kurt nostalgia.

The pièce de résistance is the footage of Nirvana in a dingy bar, performing "Smells Like Teen Spirit" for the very first time.

An edifying, enjoyable and ultimately light-hearted look at the way that things have always gone.

Four years ago, Seattle was where the home of the Space Needle. Now it's a rock 'n' roll mecca: You may ask yourself -- how did we get here? And filmmaker Doug Pray has an answer.

While the seemingly endless procession of obscure bands does get a bit wearisome, it does at least mean this isn't the Kurt Cobain-skewed, cash-in feature you might expect.

Seattle is overrun with record-company executives, and with journalists eager to over-analyze the most banal details of grunge culture. Can any form of music survive this process?

An energizing dive into a strange, strange slice of rock history.

I'm on a rock doc kick at the moment and it's been about a decade since I watched this film. We used to watch this film all the time in high school. shit. I've dated myself. Anyways, if you like music and you remember the 90s, this movie is a must see. Is grunge 'retro' yet? I think it might be time to get the band back together... Up next. Reality Bites!

Required viewing for fans of grunge music, this is just an extremely well-made documentary. Filled with candid, insightful interviews and incredible music, it's an evocative portrait of a wild phase in rock music. As someone who loves grunge, I was captivated by this film.