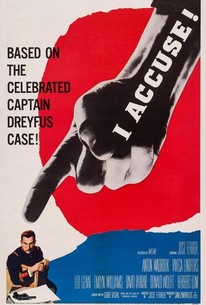 The still-controversial L'Affair Dreyfuss of the late 19th century is the focal point of I Accuse! Jose Ferrer (who also directed) stars as French Army captain Alfred Dreyfus, who is chosen as the fall guy for a major military scandal for no other discernable reason than his Jewishness. Wrongly accused of treason, Dreyfus is stripped of his rank and shipped off to Devil's Island. Friends and family members, bolstered by the support of novelist Emile Zola (Emlyn Williams), force a retrial, to no avail. When their mistake and subsequent coverup is revealed, the Army tries to save face by offering Dreyfuss a pardon, even though they will not rescind their accusation of treason. Left with no alternatives, Dreyfuss accepts, returning to France in disgrace. Only the confession of the genuine traitor enables Dreyfuss to clear his name and have his rank restored. Many of the facts of the case that had been glossed over for legal reasons in 1937's Life of Emile Zola are herein presented on film for the first time. The screenplay for I Accuse! was adapted from the Nicholas Haasz' book by Gore Vidal, who manages to make several allusions to America's own McCarthy-era "witch hunts". ~ Hal Erickson, Rovi

Malcolm Keen
as President of France
View All

Critic Reviews for I Accuse!

The un- successful 'sobriety of Vidal's script seems to have something to do with this, for the drama of the facts is played down, down, down, till it almost vanishes.

Audience Reviews for I Accuse!

There are no featured audience reviews yet. Click the link below to see what others say about I Accuse!!