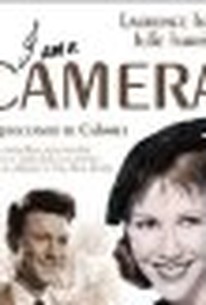 I Am a Camera Photos

Julie Harris repeats her stage portrayal of the irrepressible Sally Bowles in John Van Druten's I Am a Camera. Set in pre-Hitler Berlin, the film details the curious, chaste relationship between Sally, an entertainer at a bawdy nightclub, and fledgling writer Christopher Isherwood (Lawrence Harvey). Shelley Winters co-stars as Natalia Landauer, whose impending marriage to a wealthy young Jewish man is imperiled by the anti-Semitism which envelops Berlin as the Nazis gain political power. If all this sounds familiar to you, it is because I Am a Camera is the non-musical precursor to the Broadway musical hit Cabaret. Both properties were based on Christopher Isherwood's Berlin Stories. Those familiar with the film version of Cabaret will notice that certain plot elements have been watered down in Camera. Examples: Isherwood's homosexuality is left unmentioned, save for Lawrence Harvey's opaque opening comment that he is "a confirmed bachelor;" and Sally Bowles' third-act abortion is changed into a false-alarm pregnancy. Also, Julie Harris' dynamic but rather overbaked interpretation of Sally is not nearly as memorable as Liza Minelli's Oscar-winning interpretation of the character in Cabaret. Still, I Am a Camera is well directed and deftly adapted for the screen (by John Collier); and even taking into consideration Ms. Harris' hamminess, she remains one of the most fascinating stage personalities of the mid-20th century. ~ Hal Erickson, Rovi

Clifford A. Pellow
as Turk

Frederick Valk
as Doctor
View All

Critic Reviews for I Am a Camera

The long-forgotten non-musical forerunner of Cabaret.

There are no featured reviews for I Am a Camera at this time.

I Am a Camera Quotes