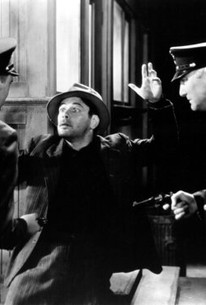 I Am a Fugitive From a Chain Gang Photos

Wrongfully convicted for a hold-up, a war vet sentenced to a chain gang escapes and builds a new, respectable existence, only to realize he can never be free of his past. This classic, still-powerful reality-based indictment of the Depression-era prison system is the peak of Warner's 1930s school of social realism.

Charles B. Middleton
as Train Conductor

Erville Alderson
as Chief of Police

News & Interviews for I Am a Fugitive From a Chain Gang

View All I Am a Fugitive From a Chain Gang News

Critic Reviews for I Am a Fugitive From a Chain Gang

Based on a true story, its style is simple, direct, forceful -- even after more than six decades.

I Am a Fugitive from a Chain Gang is a picture with guts. It grips with its stark realism and packs lots of punch.

Suprisingly no-holds-barred portrait of institutional bullying for such an early film.

Muni gives a brilliant performance as a regular guy wrongly convicted of murder and subjected to the hardships and beatings of a dehumanising chain gang regime.

The prison scenes are blatantly manipulative-and effective-but Fugitive really takes off during an intense escape sequence.

For all its insufficiencies, I am a Fugitive is an advance in American film-content and to that extent its form is shaped.

It's a tough, unyielding look at trapped people, based on the autobiographical novel by Robert Elliott Burns.

...memorable for Muni's superbly reticent performance, and as a social document.

The truly extraordinary thing is that the filmmaker has been able to give the same painful feeling of nightmare, anguish, that the book delivers. [Full Review in Spanish]

I quarrel with the production not because it is savage and horrible, but because each step in an inevitable tragedy is taken clumsily, and because each character responsible for the hero's doom is shown more as a caricature than as a person.

A moody, nasty-minded crime movie full of rage and anchored by some deep, moody visuals.

Audience Reviews for I Am a Fugitive From a Chain Gang

Hot off the wheels from Howard Hawks' 1932 Scarface, Paul Muni gives a much more focused and compelling performance as the titular fugitive. The story is based on true events, and the injustices it evokes on the big screen infuriate accordingly. The female roles are (unfortunately) secondary to all other plot elements, but the film still warrants a viewing if but for the political uproar it brought about after exposing the chain gang system.

If you're not interested in the volatile performance of Paul Muni, the violence of a 30's chaingang, or a morally obscured storyline, then watch this film for its historical and cultural aspects. This film caused an uproar during the heyday of the Hays Code for its portrayal of chain gangs as abusive and negligent means of torture, which at the time was the preferred course of punishment in America. Muni is the original Andy Dufresne, innocent of his conviction, yet forced into hard labor, finally being prodded to escape. The only difference between Andy and James Allen (Muni), being the nature of the escapes, one leading to redemption, another forcing an honest man into a life of crime in order to escape the tragic circumstances of a deadly prison sentence. Besides that, Muni, one of the great stage and screen actors of his time, blew me away with his emotional variance. A gem among Hollywood treasure.

One of the greatest and most famous of the social imperative films of the pre-Hayes Code 1930's, I Am A Fugitive From A Chain Gang depicts a man's decade long battle to attain the unattainable, peace. A truly fantastic Paul Muni plays James Allen, a returning WWI vet who gets wrongfully arrested and sentenced to ten years hard labor at an abhorrent southern work camp. There he -- and 1930's audiences -- witnessed the atrocities of the chain gang institution in the American south. And that was the point -- to expose its cruelty and incite reform. For all its cynicism, this Mervyn Leroy classic is still an absorbing and exciting portrait of one man's hell: from combat to prison to fugitive life, and then finally to the shadowy, soul-sucked, madness that comes with a life fraught with such hardship. Muni's tour-de-force induces not only sympathy, but anger toward the heartless miscarriages of justice that condemn Allen throughout the film. I was by turns enthralled, enlightened, heartbroken, and frustrated by his journey from start to finish. Leroy's 1932 film is a fiery indictment of the chain gang hypocrisy that often lacks subtlety, but never power.

A fun, light-hearted romp through... ahh, just kidding. This is a gritting, depressing film about the horrors of the chain gang prison camps of the south in the early 20th century. Based on the auto-biographical novel by Robert E. Burns, the story follows James Allen (Paul Muni), an out-of-work veteran who gets arrested for stealing $5, and is sentenced to 10 years of hard labor. Chained at the leg, he's beaten by guards, hit with chains, and worked nearly to death (in fact, he watches men around him die from this). Finally, after years of suffering, he manages to escape to Chicago, where he makes a new life for himself. He becomes a successful millionaire, but his new wife begins to make trouble for him. Rather than lose his money, she turns him over to the authorities. But the Chicago police refuse to extradite him to the south, and it's only after they agree to suspend his sentence after 90 days and give him a clean record that he agrees to turn himself over to them. But they go back on their word and send him back to the chain gang, this time for an indefinite time. Allen seems driven mad by the prospect, it's not justice they're after but revenge, he says. Some of the acting is pretty bad, mainly with the brother/preacher and the first wife (but her problem is the corny "gangster" dialogue she spouts off), but Paul Muni is quite good, especially in the scene that closes the movie. It's a positively eerie moment as he slips into the shadows, driven to the brink of madness. The film is a powerful statement about the injustice in the world, and especially one of the cruel injustices of it's day.

I Am a Fugitive From a Chain Gang Quotes