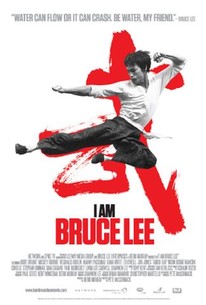 I Am Bruce Lee Photos

I Am Bruce Lee tells the amazing story of one of the most iconic human beings ever to enter the public consciousness. Voted as one of the most important people of the 20th century in Time Magazine's Time 100, as well as one of the Greatest Pop Culture Icons by People Magazine, Bruce Lee continues to be honoured and remembered for his enduring legacy. Bruce Lee's often revolutionary and sometimes controversial thinking on a multitude of planes has become a source of inspiration and debate for a generation of philosophers, actors, filmmakers and athletes. The film is a compelling and visually stunning uncovering of Bruce's life, his enormous impact, and his ever-expanding legacy in the world of martial arts, entertainment, and beyond-despite his tragic and sudden death at the age of 32. -- (C) D&E

Critic Reviews for I Am Bruce Lee

Its odd agenda rather overshadows some fascinating archive footage and reminiscences from Lee's family.

Martial-arts fans will love this Bruce Lee tribute - cinephiles might be less satisfied.

Baggy, braying and kinda unhelpful, this one is strictly for paid-up Lee lovers.

Lee's legions of fans might get a kick out of this, but newcomers would do better to invest in a DVD of 'Fist of Fury'.

I Am Bruce Lee does a fine job showing just what his legacy has been as well as perfectly illustrating his charm, charisma, speed, and grace.

"I Am Bruce Lee" is a documentary that mostly praises a mighty icon in the world of martial arts. It's a thoughtful repackaging of information we've seen before.

If you want to kick back and bask on Bruce Lee glory for ninety minutes, "I Am Bruce Lee" definitely fits the need.

Watchable documentary that's chiefly notable for its archive footage of the man himself, though it's also all rather one-sided and there's very little here that will be new to Bruce Lee fans.

How does a small Chinese guy become the movies' greatest martial artist of all time? That question drives this reverential documentary about the man with the one-inch punch.

Whether you're a mixed martial arts fan, a kung fu movie junkie or a pop culture enthusiast enthralled by Lee's iconic image, you'll find something in "I Am Bruce Lee" to enjoy.

Audience Reviews for I Am Bruce Lee

There are no featured audience reviews yet. Click the link below to see what others say about I Am Bruce Lee!

I Am Bruce Lee Quotes