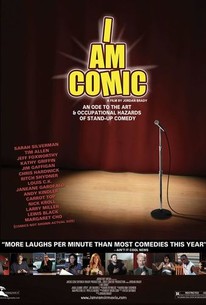 I Am Comic Photos

Through unprecedented backstage access and candid interviews, the film weaves through the absurd world of the working comedian and reveals a crazy and hilarious psychological profile of its practitioners. We also follow retired comic Ritch Shydner's attempt to climb back on stage after a thirteen-year hiatus. At the top of his game in the 1980's, Shydner had HBO specials, shot five pilot TV shows, and numerous late night appearances (Carson, Letterman, Leno, etc.) but the big time eluded him. Equipped with the collective wisdom and nutty musings of over 80 of his peers, he gives it another shot. Does Ritch have what it takes to connect with today's young crowds and still get the laughs? Guaranteed to make you watch.

Critic Reviews for I Am Comic

The first thing that a documentary about stand-up comedy ought to be is funny. Thankfully, I Am Comic succeeds handily on that count.

If you love standup comedy -- I mean, really love it -- then I Am Comic is a flawed must-see.

Audience Reviews for I Am Comic

Watchable. Some parts are great but the edits are rough and a lot of these interviews lack originality and seem pretty scripted.

This documentary interviews highly-successful comedians like Jeff Foxworthy, and has-beens like Bobcat Goldthwaite. Every one of them is addicted to the jokes and the audiences, and continue to perform no matter what the conditions. The director is funny, and adds little captioned asides that are sometimes funnier than the material. I'm surprised at the reviews that claim this is hysterical. It's funny in spots, but mostly its just sad.

I Am Comic Quotes