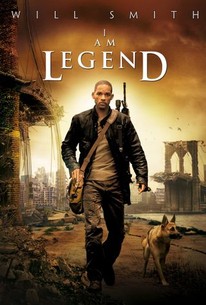 Critics Consensus: I Am Legend overcomes questionable special effects and succeeds largely on the strength of Will Smith's mesmerizing performance.

Critics Consensus: I Am Legend overcomes questionable special effects and succeeds largely on the strength of Will Smith's mesmerizing performance.

Critic Consensus: I Am Legend overcomes questionable special effects and succeeds largely on the strength of Will Smith's mesmerizing performance.

I Am Legend Photos

Adapted from acclaimed author Richard Matheson's influential novelette of the same name, Constantine director Francis Lawrence's I Am Legend follows the last man on Earth as he struggles to survive while fending off the infected survivors of a devastating vampiric plague. A brilliant scientist who raced to discover a cure for the man-made virus as humanity came crumbling down all around him, Robert Neville (Will Smith) was inexplicably immune to the highly contagious superbug. Now the entire population of New York City -- and perhaps the world -- has been transformed into carnivorous bloodsuckers that fear the light and live solely to spread their contagion to any remaining living creature that crosses their path. It's been three years since civilization came to an end, and the loneliness has taken a devastating toll on Neville. By day he scours the city for food and supplies while sending out desperate radio messages in hopes that someone might respond, and by night he attempts to find a way to reverse the effects of the virus by experimenting with his own blood. But time is running out for Neville as the legions of infected watch his every move from the safety of the shadows, waiting for the perfect moment to strike. They, too, long to learn the secret that lurks in Neville's blood, though they will have to take caution while attempting to procure it because Neville will sooner die attempting to slay every last one of them than willingly giving up a single drop. Previously adapted for the screen in the 1964 Vincent Price frightener The Last Man on Earth and the 1971 Charlton Heston action film The Omega Man, Matheson's novelette also served as the inspiration for George A. Romero's groundbreaking zombie classic Night of the Living Dead. ~ Jason Buchanan, Rovi

Will Smith
as Robert Neville

Tyree Simpson
as Evacuation Cop No.2

Mark Steger
as Infected
View All

News & Interviews for I Am Legend

View All I Am Legend News

Critic Reviews for I Am Legend

If you ignore its flaws, I am Legend can be enjoyed as the perfect brainless Boxing Day blockbuster - but it is essentially a leftover festive turkey.

When they do, banging their heads against plate glass as movie zombies always do, I started needing something else to think about.

I wouldn't dream of giving away the ending, but it's not likely to satisfy either the action crowd or Matheson fans.

It is absolutely gripping in its vision of how lonely it would be to be the last man on Earth. It's absolutely dull in almost every other respect.

I Am Legend is a grenade that goes off when least expected. It has more horror than heart, but it is never boring.

Will Smith is outstanding in this gripping apocalyptic tale.

Amazingly, [Will Smith] not only keeps it credible, he pulls it off with aplomb.

A lot has been left to the imagination, especially during the adaptation of the novel, from which the film deviates so greatly that taking its title was far from necessary.

The screenplay from previous Oscar-winner Akiva Goldsman and Mark Protosevich is a disappointingly convoluted script that lacks clarity and purpose.

Nothing is scarier than Francis Lawrence's direction. [Full review in Spanish]

Audience Reviews for I Am Legend

This post-apocalyptic zombie-based film is strong thanks to in part the special effect/CGI work as well as the strong lead of Will Smith. I Am Legend is graphic in the realms of loneliness and isolation and makes a solid film for audiences to enjoy. 4/5

Will Smith stars as a military researcher who is seemingly the last person left on Earth trying to find the cure for an engineered retro virus that has decimated the human population and turned many into mindless killing machines. It seems to me that the reason a lot of people slated this film was solely because it was not a faithful adaptation of the book it takes its name from. I personally haven't read it and to be honest I don't care if it's faithful or not. A carbon copy adaptation of a book does not necessarily make a good film and vice versa; the two are completely different media. The fact is that I found this pretty enjoyable. Will Smith is quite convincing as a man suffering the loneliness of total isolation and the scenes in the first hour of the film when the "enemy" is still unseen are very effective. It's therefore a pity that it descends into the usual CGI infested Hollywood claptrap for the final half hour. It reminded me of 28 Days Later because of the similar scenario and unfortunately it suffers from the same problem; the set up is great but it didn't seem to know where to go from there. Once the mother and son characters appeared it turned into a dodgy CGI-laden shoot em up and became far less interesting, but it's definitely worth a watch for the earlier scenes. Some of the plot elements are not properly explained and the ending is a little weak, but not bad as a whole.

It was thrilling and captivating to watch the first time around. Afterwards the flaws became extremely apparent, yet were eclipsed at times by Will Smith's excellent acting and infusion of humor despite the film's dark themes.

i loved this movie. will smith did an excellent job and the film flowed well. no time was wasted on the meaningless, i felt that every scene was essential. to see smith create community with dummies and risk his life for his dog shows humanities need for relationship. this is defintely one of the better films of 2007.

I Am Legend Quotes