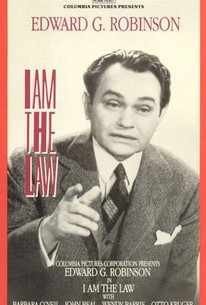 I Am the Law is arguably the best of the late-1930s films inspired by the racket-busting career of New York district attorney Thomas E. Dewey. Edward G. Robinson switches to the right side of the law as the Dewey counterpart, here named John Lindsay (!) A feisty, no-nonsense law professor, Lindsay is approached by a group of concerned citizens to act as special prosecutor to rid up their (unnamed) state of big-time lawbreakers. He wastes no time taking charge, storming into the prosecutor's office and firing anyone whom he suspects of being "on the take." With the help of his dedicated law students, who work alongside him for free, Lindsay purges the local government of such corrupt influences as Eugene Ferguson (Otto Kruger), the outwardly respectable "brains" behind the rackets. Among the minor pleasures in I Am the Law is watching Robinson dancing the Big Apple with gun moll Wendy Barrie in an early scene, and his firing of suspicious-looking Charles Halton with a brusque "Don't like your face! Never have! You've got shifty eyes and a weak chin!" (which, indeed, were Halton's screen trademarks). Barbara O'Neil, who the following year played Scarlet O'Hara's mother in Gone with the Wind, is quietly effective as Robinson's supportive wife.

Will Morgan
as Student

Eddie Fetherstone
as Austin
View All

Critic Reviews for I Am the Law

It's all fairly familiar, but the story takes so many hairpin turns and moves at such a breakneck speed that it's highly exciting entertainment.

Audience Reviews for I Am the Law

There are no featured audience reviews yet. Click the link below to see what others say about I Am the Law!

I Am the Law Quotes