I Am the Pretty Thing That Lives in the House2016 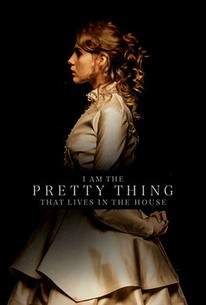 I Am the Pretty Thing That Lives in the House Videos

I Am the Pretty Thing That Lives in the House Photos

I AM THE PRETTY THING THAT LIVES IN THE HOUSE tells the story of a Lily, a young nurse hired to care of elderly Helen Bloom, a best-selling author of ghost stories who has chosen to live out her final days in her beloved country home--a home that holds an horrific ghost story of its own.

Slow and determinedly poised ... I am the Pretty Thing that Lives in the House is ... an acquired taste, but its rejection of predictable ten-minute cyclic jump-scares [and] perkily inquisitive adolescents ... make it a quiet, unsettling delight.

An atmospheric take on the haunted house flick that works more with dread and the looming specter of death than the traditional tropes that often define the genre.

Can a horror movie get by on nothing but atmosphere, on the the je ne sais quoi of its unsettling mood? I Am The Pretty Thing That Lives In The House suggests that maybe it can.

A lightly gothic murder ballad made with great finesse and a fine cast.

Wilson delivers a hardworking performance that nonetheless can't render a familiar character type fascinating enough in a vacuum, with so little support in the writing.

It's commendable that Perkins seems wholly uninterested in the tropes of the genre: there's only one jump scare, hardly any gore and no final girl. The elusiveness of the narrative, however, grows weary fast.

I Am The Pretty Thing That Lives in the House is the slowest of slow-burn ghost stories (featuring the return to cinema of the incomparable Paula Prentiss after ages) about a young woman working as a caregiver and attendant for a reclusive novelist.

Osgood Perkins certainly gives an odd cinematic flair to his images and uses his unique and impressive prose to shape interesting themes, but he ultimately fails his promising female leads.

As a whole I am vastly underwhelmed by I Am the Pretty Thing That Lives in the House. It is stylish and beautiful, but lacked the substance to make it a complete story.

The tedious images and whispers that flood the film are not enough to keep the public's interest. [Full review in Spanish]

A boring and pretentious movie -something that when you do it well helps you to go further, but when you fail it makes everything negative stand out even more. [Full review in Spanish]

Similarly to what he did in his previous film, Perkins invests well in an eerie atmosphere that leaves us uneasy even if we don't know what to fear, but still the experience becomes frustrating for not going anywhere beyond the most obvious, no matter how deeply poetic everything sounds.

If your average film is a storybook put to screen, then I Am The Pretty Thing is a poem put to screen. I can appreciate that they were trying something different here, but I was never much for poetry.

First things first, this isn't the type of horror movie that, say, someone who just watches horror movies casually would enjoy. Realistically speaking, this movie, in parts, reminds of The Witch, which was released earlier this year. What I mean by that is the fact that if you were to watch the trailer for both films, you would expect a straight up horror movie, when it's really anything but and that's where people expecting something completely different than the trailers were disappointed. That's their own fault, though. Films should be judged as they are and not what we project on them. I digress, The Witch also had a lot of expectation and acclaim behind it, so that's where these two movies differ. This one didn't really have a lot of hype behind it and while film critics were, generally, positive towards this flick, they weren't raving about it either. As far as I go, however, I enjoyed this movie thoroughly. I don't necessarily say this often, but this is a legitimately creepy little ghost story. Well, maybe I have said it before, but this movie is really on another level of creepy storytelling. Does it always have the most coherent story? Not really. I can see a lot of people not liking this movie because, to them, it doesn't really make a lot of sense. And I can't fully agree or disagree on that. Because, I believe, the movie is purposely designed to be somewhat confusing. As to what exactly happened to Polly and why, how Polly was able to communicate with Iris and how Lily fits into all of that. The movie doesn't make any of that clear and perhaps it's not meant to. Because of that, I think some people will find it difficult to sit through the movie. I'm not saying there's no purpose or reasoning behind it, but it's a movie that chooses to not necessarily rely on a coherent narrative to get its point across as much as it relies on the creepy atmospherics and an unnerving mood. And, honestly, I think it does that really well. The movie is definitely a bit of a slow-burner, I mean it almost has to be given what it wants to be, but I was completely with the movie right from the very beginning. The movie definitely takes its sweet time to get where it's going, but I never felt that it was infuriating to watch. Yes, they do take their sweet time, but it's also a movie that give you bits and pieces exactly when they need to just to keep you wanting more. At least that's how it was in my case. It's a well-written movie, at least as far as dialogue is concerned because, as I mentioned, the narrative is only really so-so. The acting is pretty damn strong too, so no complaints on that front either. The look of the film isn't great, but it definitely gets the job done and it works well with the atmosphere and the mood they wish to get across. That's really all I have to say about this movie, there's really not very much to go on or that you can talk about in a review, at least one of mine, in detail. With that said, it's not a perfect movie, not even close, but I think it was a good little ghost story that's high on atmosphere and dread. That's where the movie shines. I'd recommend it if you can be patient with it.

I'll pay the film that it covers the bases with an atmosphere that is unbearable at times. The issue here is the pacing, much like The Witch, it fails to have strong beats to entertain its audience. Critics seem to like this film but they are bigots with film and clearly miss the point of cinema. This is severely boring at times and filmed with the lense on, seriously why so dark? Natural lighting doesn't excuse filmmakers to at least have a coherent plot. I liked the lead and thought she was the only thing worthy of watching this film.

I Am the Pretty Thing That Lives in the House Quotes