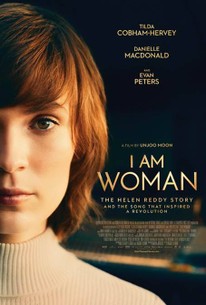 I Am Woman Videos

I Am Woman Photos

In 1966, single mother Helen Reddy (Tilda Cobham-Hervey) leaves her old life in Australia for New York and stardom, only to find that the industry's male gatekeepers don't take her seriously. Helen finds an encouraging friend in legendary rock journalist Lillian Roxon (Danielle Macdonald), who becomes her closest confidant. When ambitious aspiring talent manager Jeff Wald (Evan Peters) sweeps Helen off her feet, everything changes as he becomes both her husband and manager and relocates the family to California. With a strong push from Helen, Jeff secures her a recording contract and subsequent string of hit singles, including the iconic megahit "I Am Woman." Increased fame leads to added pressures on themselves and their relationship, forcing Helen to find the strength to take control of her own destiny. I Am Woman is the inspiring story of singer Helen Reddy, who wrote and sang the song "I Am Woman" that became the anthem for the women's movement in the 1970s. The film is a story of fearless ambition and passion, of a woman who smashed through the patriarchal norms of her time to become an international singing superstar.

Molly Broadstock
as Traci
View All

News & Interviews for I Am Woman

View All I Am Woman News

Critic Reviews for I Am Woman

This defiantly bland biopic of the Australian singing star Helen Reddy, who died this month, manages the remarkably counterintuitive feat of being oddly anti-feminist while describing the life of an acknowledged feminist flag-bearer.

Each scene needed a jolt of music or energy that just wasn't there.

The power of her music and the enduring struggle of women makes the film resonate beyond its formulaic surface.

It is a very standard biopic in many ways, but the lead performance is so warm and accessible... A cool little slice of American history.

I Am Woman all too conveniently hauls out the usual biopic tropes but, as is true of so many other films in this genre, including much better ones, it's worth experiencing for its star performance.

She is woman, but the Helen Reddy biopic doesn't roar.

It's hard to forgive the level of clunky, chubby cliches that populates every single scene...

Unfortunately, Cobham-Hervey's hollow turn in the lead threatens to sink the whole enterprise, having more in common with Reddy's conventional music than her revolutionary message.

This well-made, sturdy biopic is heart-warming - and Cobham-Hervey's performance is captivating.

'I Am Woman' is a pleasant way to spend a couple of hours. But it lacks the drama and depth of other rockstar biopics. Helen Reddy and her anthem to feminism deserve more.

Adding insult to injury, the script often alters or ignores facts for no good dramatic reason, while mostly sidestepping Reddy's vocals to have the actress lip-synch to an OK impersonator...

A winsome Tilda Cobham-Hervey leads a rote rags-to-riches tale, though its rampant sexism is a villain women will recognize. Needs to be seen, even if it's not quite the tribute Helen Reddy deserves.

There are no featured reviews for I Am Woman at this time.

I Am Woman Quotes