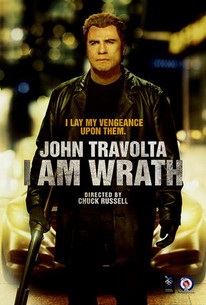 I Am Wrath Videos

I Am Wrath Photos

ohn Travolta is Stanley Hill, a former Black Ops agent who witnessed his wife's death at the hands of a street gang. When corrupt cops let the prime suspect walk, Stanley takes the law into his own hands. Joined by a former comrade-in-arms (Christopher Meloni), Stanley uncovers a conspiracy that leads to the upper ranks of government, as he heads toward a guns-blazing, take-no-prisoners showdown for justice.

Georgianna Brent
as Woman at Rally

Critic Reviews for I Am Wrath

Travolta, who took over the role from Nicolas Cage, and Meloni, who's looking more and more like Robert De Niro every day, have a loose, easy chemistry that goes a long way to enliven all that overworked familiarity.

The script, besides being full of bad-guy clichés, doesn't give the actors enough opportunities to work up a buddy rapport, though the glimmers of it that they are permitted are promising.

It's yet another entry in the endless cycle of middle-aged vigilante rampages-a formula that no one but Liam Neeson seems capable of actually wringing entertainment from, try as his various fiftysomething peers might.

I Am Wrath is about as clichéd as clichéd gets when it comes to the action/revenge genre.

It's ultimately rather astonishing the degree to which I Am Wrath slowly-but-surely alienates the viewer over an often interminable running time...

The film dies on impact, providing a good reminder to rewatch "John Wick" instead.

Audience Reviews for I Am Wrath

There are no featured audience reviews yet. Click the link below to see what others say about I Am Wrath!

I Am Wrath Quotes