I Became a Criminal (They Made Me a Fugitive)1948 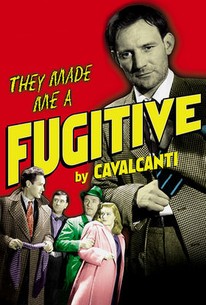 I Became a Criminal (They Made Me a Fugitive) Photos

Clem Morgan (Trevor Howard), an embittered ex-RAF pilot, mistakenly believes the life of crime is for him in this exceptionally dark British film noir, directed by Alberto Cavalcanti. He joins a gang of black marketeers led by the aptly named Narcey (short for Narcissus) (Griffith Jones), an egotistical and sadistic thug. The two develop an almost immediate mutual dislike, leading Narcey to frame Morgan for killing a policeman. While serving the resulting 15-year sentence, Morgan is visited by Narcey's sometime girlfriend Sally (Sally Gray), who tells him that the thug has taken up with the prisoner's fiancée, and that a witness to the frame might come forward. This triggers an even more bitter Morgan to escape and return to London to try to clear and avenge himself. Many postwar American films noirs dealt with alienated but law-abiding veterans, some of them framed for crimes they did not commit, e.g. Alan Ladd's Johnny Morrison in The Blue Dahlia. This British effort goes a noteworthy step further by placing the protagonist in the criminal underworld. Its downbeat ending is consistent with its unrelenting cynicism. ~ Steve Press, Rovi

Cavalcanti's film-with its hints of Brecht's Three-Penny Opera and Dickens' Oliver Twist-seems to insist that the society emerging from the "Great War for Democracy" was spawning more than its share of money-hungry, fascistic thugs.

A postwar British noir film; revenge being the theme.

a grimy brit noir with trevor howard as an ex-raf pilot and black marketeer who falls in with drug smugglers. when he tries to get out, he's framed for murder and goes on the lam looking for the man who can clear his name, with criminals and cops on his trail. some really dark stuff and alot of tough talk, which is fun coming from howard; griffith jones is suitably nasty as crime boss narcy (short for narcissus!) and the very lovely sally gray plays howard's love interest. directed by brazilian-born alberto cavalcanti, most famous for the much imitated ventriloquist's dummy segment in dead of night

I Became a Criminal (They Made Me a Fugitive) Quotes