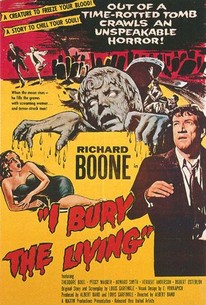 I Bury the Living Photos

Unjustly ignored by many books on the horror film, I Bury the Living is a bone-chilling little mood piece, almost completed dominated by Richard Boone. Expertly avoiding the obvious throughout the film, Boone gives a thoroughly credible performance of a troubled man who labors under the misapprehension that he is God. Boone plays the new chairman of a large cemetery; in his office is a map of the grounds, with black pins representing the occupied plots, and white pins representing plots that have been purchased but not yet filled. When Boone inadvertently mixes up the black and white pins, several of the plot owners suffer untimely deaths. Inevitably, Boone becomes convinced that he has the power of life and death--a conviction that doesn't completely dissipate once the secret behind the sudden deaths is revealed. ~ Hal Erickson, Rovi

Howard I. Smith
as George Kraft

Critic Reviews for I Bury the Living

Sure, this is basically just like an extended episode of The Twilight Zone, but that's no bad thing, since it's like a good episode.

Dismally ends with a whimper instead of fright.

Turns out it's a lot like an Outer Limits episode that somehow escaped and became a feature.

Interesting, thoughtful horror flick that falls apart at the end

I Bury the Living proves to be a dark little horror morsel, a creepy, compact and crisp little tale that's half Alfred Hitchcock and half Rod Serling.

Audience Reviews for I Bury the Living

This movie really keeps you guessing as to what is really going on until the very end. It's really cool, but kind of funny too. I like this movie.

Good story plot. One with utmost powers, that has got to be interesting.

I Bury the Living Quotes