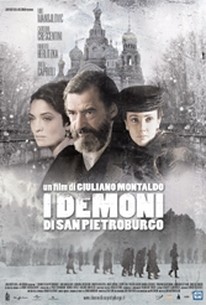 One of the greatest writers in Russian literature is forced to take on a task his gift with the pen has not prepared him for in this historical drama. Fyodor Dostoyevsky (Miki Manojlovic) is working on his latest novel, The Gambler, with the help of his secretary Anna (Carolina Crescentini) when he's summoned to a insane asylum to meet with Gusiev (Filippo Timi), a former associate who is now an inmate. Gusiev tells Dostoyevsky a remarkable story that he's joined a band of rebels who are plotting to assassinate the leaders of the Russian royal family. A loyalist to the throne, Dostoyevsky is determined to stop the revolutionaries before they can carry out their deadly plan, but can he fully trust the words of a supposed madman? Directed by Italian filmmaker Giuliano Montaldo, I demoni di San Pietroburgo (aka The Demons of St. Petersberg received its world premiere at the 2008 Moscow Film Festival. ~ Mark Deming, Rovi

There are no critic reviews yet for I Demoni di San Pietroburgo. Keep checking Rotten Tomatoes for updates!

There are no featured reviews for I Demoni di San Pietroburgo at this time.