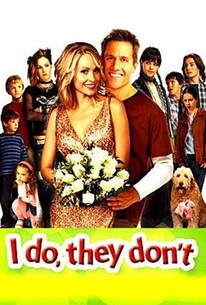 I Do, They Don't Photos

On an impulse, Carrie Llewellyn (Jodie Bissett) and Jim Barber (Rob Estes) are married in Las Vegas. The couple heads home dreading the prospect of breaking the news of their instant union to their children--of which they have eight between them. It helps not at all that many of the kids already don't like each other, nor that Carrie's offspring can't warm up to Jim, and vice versa. An eventful family excursion to the local bowling alley finally brings everyone together--and when it seems that Carrie and Jim may drift apart, it's the children who cook up strategies to bring them back together. In one respect, this made-for-cable movie goes way, way past The Brady Bunch when a brief romance develops between the two oldest kids. Produced for the ABC Family Channel, I Do, They Don't was originally telecast on March 20, 2005.

Tyler Hynes
as Rusty
View All

Critic Reviews for I Do, They Don't

There are no critic reviews yet for I Do, They Don't. Keep checking Rotten Tomatoes for updates!

There are no featured reviews for I Do, They Don't at this time.

I Do, They Don't Quotes