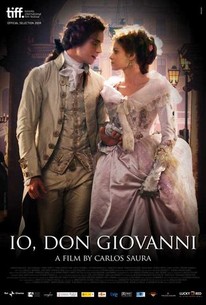 The backstage intrigue behind the creation of one of the world's great operas provides the story for this historical drama from director Carlos Saura. Lorenzo Da Ponte (Lorenzo Balducci) is a defrocked priest who, after a failed marriage and a spell running a brothel, has found himself in Vienna, where his gifts as a poet and friendship with Casanova (Tobias Moretti) have led to an introduction to composer Salieri (Ennio Fantastichini). Salieri has been commissioned by the Viennese court to write an opera and is in need of a lyricist. Da Ponte agrees to write the libretto for Salieri's latest project, but when the composer becomes disinterested, he passes the opera on to one of his associates, Mozart (Lino Guanciale). As Da Ponte juggles both serious and casual relationships with several women and Mozart struggles with his muse, their adventures become a reflection of the story Da Ponte and Mozart are setting to music. Io, Don Giovanni (aka I, Don Giovanni) was an official selection at the 2009 Toronto International Film Festival.

Mozart lovers will be intrigued but dissatisfied.

The film is colorful and lively.

It's all terribly Masterpiece Theatre, slow and beautiful, only with more seduction scenes. The music, the costumes and the breathtaking cinematography (courtesy of Vittorio Storaro) will keep you happily engaged.

There are no featured reviews for Io, Don Giovanni at this time.