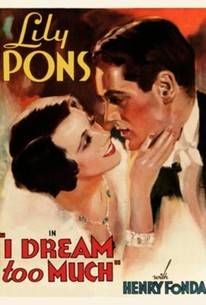 I Dream Too Much Photos

If Columbia could make an acceptable movie star out of opera-diva Grace Moore, then RKO Radio could do the same with Lily Pons. At least that was producer Pandro S. Berman's reasoning when he cast Pons in the 1935 musical romance I Dream too Much. The actress plays Annette, a rural French musical student who marries struggling American composer Jonathan (Henry Fonda). Possessed of a splendid singing voice, our heroine rises to fame on the opera stage, while poor Jonathan continues struggling, supporting himself as a tour guide. Annette eventually saves her marriage by transforming her husband's "masterpiece," a rather turgid modernistic opera, into a light-hearted musical comedy. Lucille Ball, who'd later co-star with Henry Fonda in The Big Street and Yours, Mine and Ours, has a funny minor role as a gum-snapping tourist. Though Lily Pons was at least 10 years older than Fonda, they make an attractive and believable screen couple, adding credibility to this somewhat contrived yarn. And of course, Lily Pons is seen and heard to excellent advantage in a variety of solos, both brand-new (courtesy of Jerome Kern) and classical: In the closing production number, the svelte Ms. Pons is alluringly garbed in a revealing oriental costume, proving once and for all that women did have belly-buttons back in 1935!

Scotty Beckett
as Boy on Merry-Go-Round

Critic Reviews for I Dream Too Much

I Dream Too Much means well but it can't move beyond its televisual a esthetic and a bland plot that doesn't really go anywhere.

There are no featured reviews for I Dream Too Much at this time.

I Dream Too Much Quotes