I Hope They Serve Beer in Hell2009 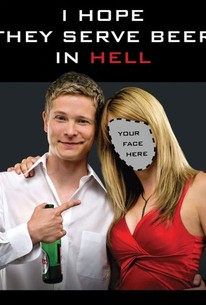 Critics Consensus: I Hope They Serve Beer in Hell fails in its attempts at raunchy humor, and Tucker Max comes across so unlikable and outrageous that the film's inevitable story arc feels forced.

Critics Consensus: I Hope They Serve Beer in Hell fails in its attempts at raunchy humor, and Tucker Max comes across so unlikable and outrageous that the film's inevitable story arc feels forced.

Critic Consensus: I Hope They Serve Beer in Hell fails in its attempts at raunchy humor, and Tucker Max comes across so unlikable and outrageous that the film's inevitable story arc feels forced.

I Hope They Serve Beer in Hell Photos

Earning the type of divisive emotional responses normally reserved for those on the far right or the far left of the political spectrum, writer Tucker Max celebrated his debauchery-driven lifestyle in the memoir I Hope They Serve Beer in Hell. Now Max earns credit as both co-screenwriter and producer of the film adaptation with this comedy from Niagara Niagara director Bob Gosse. In the film, Tucker (Gilmore Girls' Matt Czuchry) behaves very badly at his friend's bachelor party, getting his invite to the nuptials revoked. Can he renounce his (not-so) inner selfish jerk in time to recapture his invitation? I Hope They Serve Beer in Hell also stars Geoff Stults, Jesse Bradford, and Traci Lords. ~ Kimber Myers, Rovi

Michael A. Worley
as Little Tucker

News & Interviews for I Hope They Serve Beer in Hell

View All I Hope They Serve Beer in Hell News

Critic Reviews for I Hope They Serve Beer in Hell

Nominally a gross-out guy-bonding comedy, the film often feels like an attempt to establish an insanity motive for some future crime.

Even the least discerning fans of lowbrow comedy will need to start digging in order to reach the level achieved by this American indie comedy about three Texan friends on a pre-wedding bender.

You could get angry that a guy like this even got a chance. Or you could just forget about him, and move on to something worthwhile.

Might be the most hypocritical feature in the history of film as well as the history of hypocrisy, and along with serving beer, I hope they show I Hope They Serve Beer in Hell in hell.

Tucker Max's only real strengths are his outrageousness and his uncompromising self-confidence, but neither comes into play in this punch-pulling, frankly boring film.

There are moments of rough comic brilliance scattered throughout, but really, this particular antihero is all anti- and zero hero.

True life and humor do make an appearance, though the morals contain an unlikely fairytale aspect for such atrocious actions, and the laughs come from disgust and shock.

This movie doesn't know the first thing about comic timing. It's tone deaf, tasteless and irrational material that has all the misplaced arrogance of a rebellious high school drop-out who thinks he or she is too ahead of the game for people to understand.

It is rare that I find a film with no redeeming qualities whatsoever.

Mildly amusing, although not the timelessly anarchic, Hangover-style comedy it clearly wants to be.

Warning: moviegoers with no pre-existing predisposition to find other people's humiliation -- usually women's -- hilarious may feel the need for a shower afterwards.

If you are a fan of the book, you are bound to be pleased; no pun intended. The film takes bathroom humor to the next level and will bring you to tears from laughter.

Audience Reviews for I Hope They Serve Beer in Hell

In "I Hope They Serve Beer in Hell," it is surprising that Tucker Max(Matt Czuchry, of television shows infinitely better than this) can study in law school when he is constantly either thinking about sex or acting on those urges, like the night before when his tryst with a deaf woman(Yvette Yates) was interrupted by the police for being too loud. So, he is definitely the right person to schedule the bachelor party for his pal Don(Geoff Stults). The local no touching rule complicates matters by forcing them to go a couple of hours out of their way, even if Don has to lie to his fiancee, Kristy(Keri Lynn Pratt), about this road trip. And hopefully it will cheer up Drew(Jesse Bradford) who has been morose and angry ever since he caught his girlfriend giving head. See, I have a soft spot in my heart for rogues which is what drew me to "I Hope They Serve Beer in Hell" in the first place but shortly came to regret my decision. While the movie is certainly worthless, it was not quite reprehensible enough for me to fumigate my DVD player. The filmmakers think these men are likable and their antics funny but they are anything but, especially in the insults aimed at women. As much as they may want to deny it, there is very little difference between sexism and misogyny as Tucker takes objectifying women to new lows in seeking to zero out his purity test score. Even then, the movie has a sentimental finale, after the requisite gross-out gags.

This is really a poor man's "Hangover". I really wanted to like it, and I did like some about it, but overall was letdown. The two biggest problems I had with the movie were the characters and it ran too long. The thing about movies like the "Hangover" that make them great are the characters. You get emotionally invested in them, and have a true affection for them. Here, I didn't care about any of the guys. Tucker was a douche, Drew was whiny, and Dan was just there. Most everything Drew said tried to be funny, but really came out stupid, and I was left thinking "Why in the hell did he say that? It makes absolutely no sense." As far as Tucker, what is there to like about him? I mean he has a couple funny moments, but the movie is about him, he should be somewhat likable. Instead he's a tool, and like Drew just has some really ignorant lines. The movie is almost two hours, and could have easily been a half hour shorter. Cut out half the horrible dialogue and it may have been a good movie. Instead it's a big waste of time. I'm all for R rated comedies and guy humor, but this was more douche bag humor(not saying I'm not a douche bag). Just watch the "Hangover" movies or "Van Wilder" instead, because why settle for a lousy cheap imitation?

I'm a big Tucker Max fan, and I read his book religiously. This film is based on Max's heralded, cult classic, best-selling book I Hope They Serve Beer In Hell. The book is nothing more than a collaboration of short stories about random nights out drinking with his buddies and having sex with random women. His stories, in essence even if they are fabricated or exaggerated as some have claimed, are pure comedic gold. His savvy charm and his sparkling wit makes every guy want to be him and every girl want to be with him. Through his book of course, a portrait is painted of Tucker Max that renders him endearing despite his self-indulgent, chauvinistic demeanor. This majestic dickhead, so to speak, would be awfully hard to pull off on the big screen. This daunting duty went to a no-namer Matt Czuchry, who actually pulled off a very convincing funny heartless bastard; but however, he failed to be likable in anyway possible.

Another aspect of this film that drew hesitation from me would be the script itself. The book doesn't flow like your typical story... it's just a collaboration of Tucker's random nights out on the town, there's no real story arc. So of course what we get is a very linear, predictable, over-hashed bachelor party storyline. Tucker Max himself wrote the script, and even deemed it far better than comedic powerhouses The Hangover and Wedding Crashers. Hopefully the enormous belly flop this film took humbled our author a little... but probably not.

Loyal fans of the book, like myself, will recognize a lot of his stories in the plot. It's also undeniable to admit that Tucker's cruel sense of humor is actually funny. However, the film fails to capture the comedic brilliance of the book, but Tucker's followers will still be pleased. It's a good, mindless laugh.

I Hope They Serve Beer In Hell is yet another in the continuation of films trying to carry the jock of the film known as Bachelor Party, failing miserably in the process. The basic premise is that Drew (Jesse Bradford) is getting married, but his fiance doesn't want him going to a strip club three hours away. The local strippers are fine, but not elsewhere. Maybe she worked there or something. I don't know, but serial sex pervert Tucker (Max Czuchry) has other plans, which include using his friends impending marriage as an excuse to go far, far away and hump a midget stripper. Throw in Drew (Geoff Stults), who is the token guy who just got dumped and hates all women (remember Bachelor Party?). All hell breaks loose, there's anger, there's midget sex, and everything works out in the end. Right? Now the first mistake that will happen is the comparisons with The Hangover. First, The Hangover was actually funny with a plot that worked. I Hope They Serve Beer In Hell is shit, a massive, steaming pile of crap that just sits there waiting for the next crap scene that makes little sense. The acting is garbage, the script is worthy of a nice flushing with characters that are not even one dimension. Can we go to fractions on this? The characters did the same schtick for the 90 plus minutes of the film, even until they have their moments of clarity. This movie goes no where, which is fine when the film is actually funny. Hell will be 24 hour showings of this film and Spider-man 3 over and over again. Hitler is probably watching this film right now.

I Hope They Serve Beer in Hell Quotes