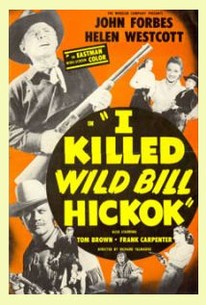 The redoubtable John Carpenter strikes again with the ultra-low-budget I Killed Wild Bill Hickok. Carpenter serves as the film's producer and screenwriter, and also heads the cast, pseudonymously billed as John Forbes. Everybody knows that Wild Bill Hickok (here played by Tom Brown) was shot in the back while playing poker, but Carpenter/Forbes boldly forges ahead with a wholly fictional scenario, wherein Wild Bill meets his Waterloo in a High Noon-style gun battle with one "Johnny Rebel" (played, naturally, by Carpenter). Though the film's cast (Helen Westcott, Virginia Gibson, Denver Pyle) is more impressive than usual for a John Carpenter production, the film betrays its cheapness through its heavy reliance upon mismatched stock footage. Warming the director's chair is ace stuntman Richard Talmadge, who despite his vast experience isn't quite in the John Ford or Lesley Selander league.

I. Stanford Jolley
as Henry Long-tree

Harvey B. Dunn
as Doc Reid

Lee Sheldon
as Kate
View All

There are no critic reviews yet for I Killed Wild Bill Hickok. Keep checking Rotten Tomatoes for updates!

This budget brand Western has a different breeding than most in that, while employing many familiar cowboy tropes, it does these things coming from a different mentality. There's a true feeling of the cowboy life and for their feeling for that life. "A real cowboy made this movie," I thought while watching it. And so, while cheaply made, there's some genuine cowboy class that shines through. Not much, but it's there for those who'll look.