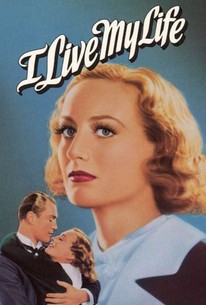 I Live My Life Photos

Feeling stifled by her wealthy existence, flighty heiress Kay (Joan Crawford) falls in love with poor archaeologist Terry (Brian Aherne). The couple seems happiest when they're yelling at one another, indicating perhaps that screenwriter Joseph L. Mankiewicz was none too fond of either character. Anyway, Terry decides that a marriage to Kay would be a big mistake, so he talks her into jilting him at the altar, thereby making a public declaration that their romance is through. But Kay "double-crosses" Terry by showing up at the wedding anyway, allowing the couple to live scrappily ever after. It's hard to tell if this is supposed to be a rip-off of It Happened One Night, but it sure plays that way in the first few reels.

Barbara Worth
as Miss Waterbury

Critic Reviews for I Live My Life

Joan Crawford in a strenuous comedy in which the hero and heroine throw things and spit at each other almost to the final clinch.

Joan Crawford's most successful picture so far. She is handsomer and better dressed than ever in it, and on this occasion hasn't time to brood over her emotions.

I liked the last Joan Crawford picture, Live My Life, more than any other which she has made in a long time.

the usual class warfare Joan Crawford film of that era.

There are no featured reviews for I Live My Life at this time.

I Live My Life Quotes