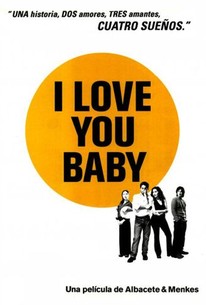 I Love You Baby Photos

From the directing team behind I Will Survive and Not Love comes I Love You Baby, a romantic comedy about the more farcical vagaries of love and sexual preference. The film opens as Marcos (Jorge Sanz) moves from the country to the city to work at his uncle's café. There, he meets and falls head over heels in love with Daniel (Santiago Magill), a dishy guy with great hair and a love of Boy George. Everything is rosy until one fateful evening when the two go to a karaoke bar. While crooning, fittingly enough, "You're Just Too Good to Be True," Marcos is whacked on the head by a falling disco ball. He is knocked out, and upon regaining consciousness, discovers that all traces of his homosexuality have been erased. Duly dumping a heartbroken Daniel, Marcos embarks on life as a straight man, falling for Marisol (Thiaré Scanda), a Dominican immigrant. Daniel, however, is determined to win back his man, and concocts a scheme -- despite urgings to the contrary from his friend, Carmen (Verónica Forqué) -- to dress up as a woman who will seduce the errant Marcos. I Love You Baby was screened at the 2002 Philadelphia International Gay and Lesbian Film Festival.

Boy George
as Himself

Marilyn Torres
as Kenya
View All

Critic Reviews for I Love You Baby

There are no critic reviews yet for I Love You Baby. Keep checking Rotten Tomatoes for updates!

There are no featured reviews for I Love You Baby at this time.

I Love You Baby Quotes