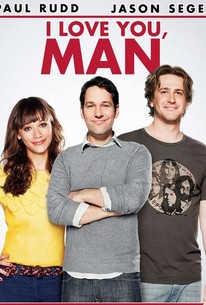 Critics Consensus: I Love You, Man makes the most of its simple premise due to the heartfelt and hilarious performances of Paul Rudd and Jason Segel.

Critics Consensus: I Love You, Man makes the most of its simple premise due to the heartfelt and hilarious performances of Paul Rudd and Jason Segel.

Critic Consensus: I Love You, Man makes the most of its simple premise due to the heartfelt and hilarious performances of Paul Rudd and Jason Segel.

I Love You, Man Videos

I Love You, Man Photos

Engaged to the woman of his dreams yet uncomfortable with the prospect of not having a best man for his upcoming wedding, a successful real estate agent with no male friends schedules a series of "man dates" in hopes of finding a suitable candidate for the big day. Peter Klaven (Paul Rudd) is just like most other guys, only when it comes to making friends he's always been a bit withdrawn. After proposing to his girlfriend, Zooey (Rashida Jones), however, Peter quickly realizes that he doesn't even have any friends close enough to qualify for the role of best man. And what better method to find the perfect best man than to spend some time getting to know the most qualified candidate for the position? While most of Peter's "man dates" are incredibly awkward from the very beginning, the desperate bridegroom is surprised to hit it off with Sydney Fife (Jason Segel) on their very first meeting. Sydney is charming, personable, and opinionated, and before long he and Peter have become inseparable. But this isn't exactly what Zooey had in mind, because the closer that Peter grows to his new "bro," the further he drifts from the woman who will soon be his wife. Now, with the wedding closing in and the drama heating up, Peter begins to ponder a means of staying good friends with Sydney while still remaining true to the woman he loves. ~ Jason Buchanan, Rovi

Lou Ferrigno
as Himself

Critic Reviews for I Love You, Man

[Segel's] performance here is loose and confident and very attractive. His star is rising.

Rudd ... is perfectly cast -- no actor this side of Hugh Grant is more comfortable getting flustered.

Ends up feeling like a tossed-off Judd Apatow photocopy.

In the coarse but compassionate style patented by Judd Apatow, the film is funny about the uncertain etiquette of incipient male friendships, but it drags a bit.

An amusing scenario gets a big boost from winning performances all round - which lift it well above other bride vs. buddy 'triangle' japes like, say, You, Me And Dupree.

The plot offers virtually no surprises, and its formulaic approach to a fairly unique perspective on the awkward humor of male bonding doesn't help the film's impact.

A feel-good flick that both men and women will enjoy.

Does nothing more than bank on its audiences' inherent homophobia.

Though the jokes can be hit-or-miss, the film does blunder along in a genial enough fashion, largely thanks to co-star Jason Segel.

A fun comedy for adults. [Full review in Spanish]

For our era, Rudd is a perfect everyman. I enjoyed Segel's antics, but liked Rashida Jones even more. A few leading roles and she would be the Doris Day of a new age.

Audience Reviews for I Love You, Man

I Love You, Man is an often surprising, mostly hilarious and offbeat Hollywood comedy. It's expertly performed by a wall to wall cast of A list comedians and fresh 'slice of life' situations that are both low key and deliciously lewd. It has empathy and sensitivity for its characters, yet still manages to be raunchy - in a good way. Written and directed by John Hamburg, the auteur behind Meet the Parents and its sequels, the script delivers the laughs and more depth than this type of studio movie usually provides. Paul Rudd, arguably the finest straight man working in comedies today, plays Pete, a repressed and slightly wimpy fellow who has no 'guy friends. His new fiance, Zooey, Rashida Jones has decided that the one thing missing before the wedding is a friend/best man, and Rudd is thrown into the cruel world of modern male bonding to find a pal. Jason Segal, plays Sydney, his budding BFF, a unfiltered and painfully honest oddball. The film is all about their on again, off again, 'bromance'. The bench strength in the cast is the movie's ace in the hole. Rudd's parents are played by the great Jane Curtin and J.K. Simmons, his gay yet masculine brother is played by Andy Samberg, and Jamie Pressly and Jon Favreau play Zooey's best friend and her blowhard poker playing husband. All get stuff to do, and make the material really sing. Rashida Jones is saddled with a generic nice girlfriend character, but infuses it with her unique warmth and offbeat energy, a wise casting decision for an underwritten role. What is special about the film is its quiet empathy and acceptance of various lifestyles and its unwillingness to trade in stereotypes. When Rudd is 'fixed up' with a potential best friend (Thomas Lennon), his date misunderstands and believes they are on a romantic first date. The subsequent tongue kiss is hilarious and cringe worthy, but is not a condemnation or mockery of the love struck man. We feel empathy and humanity towards him not because he is ridiculous, but because the film is about all of our missed signals and romantic mistakes. This is unmistakably a Hollywood comedy, not an offbeat indie quirkfest, but handled by wonderful cast and a solid, cliche busting script, it was really a pleasure.

Funny but cliched. I don't really get what the point of such a movie is, but maybe they don't all need to have a point if they make you smile for a few moments.

I Love You, Man Quotes