I Love You Phillip Morris2010 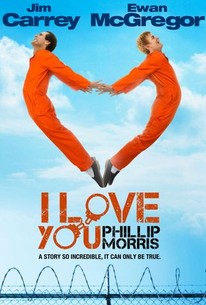 Critics Consensus: This fact-based romantic comedy has its flaws, but they're mostly overcome by its consistently sweet, funny tone and one of the best performances of Jim Carrey's career.

Critics Consensus: This fact-based romantic comedy has its flaws, but they're mostly overcome by its consistently sweet, funny tone and one of the best performances of Jim Carrey's career.

Critic Consensus: This fact-based romantic comedy has its flaws, but they're mostly overcome by its consistently sweet, funny tone and one of the best performances of Jim Carrey's career.

I Love You Phillip Morris Videos

I Love You Phillip Morris Photos

Bad Santa co-screenwriters Glenn Ficara and John Requa re-team for this fact-based black comedy starring Jim Carrey as a Texas police officer-turned-con man who makes the leap to white-collar criminal after being sent to prison and falling in love with his sensitive cellmate. Steve Russell (Carrey) is a small-town cop. Bored with his bland lifestyle, Russell turns to fraud as a means of shaking things up. Before long, Russell's criminal antics have landed him behind bars, where he encounters the charismatic Phillip Morris (Ewan McGregor). Smitten, Russell devotes his entire life to being with Morris regardless of the consequences -- which could well include a life sentence. ~ Jason Buchanan, Rovi

Don Yesso
as Guard
View All

News & Interviews for I Love You Phillip Morris

View All I Love You Phillip Morris News

Critic Reviews for I Love You Phillip Morris

The movie wants us to overlook its implausibility by insisting that it's all true. We believe it, we just don't care.

This is the most interesting role Carrey has had in a long while.

Jim Carrey is the narrator... transforming what could have been a cliched con man comedy, generic Jim Carrey-character comedy or run-of-the-mill gay coming-out comedy into something smarter, sweeter and downright giddy.

Russell was a fascinating character and a real puzzle box; but the filmmakers have turned his life into a broad farce with one wocka-wocka gag after another.

[The] elaborate cons may be fascinating, daring stuff, but the heart of the picture is the romantic relationship, which is squeezed out to the edges.

It's confused and confusing, by turns hilarious and off-putting. In short, it's awfully hard to love I Love You Philip Morris.

A comedy that's all the funnier for the laughs carrying weight, a drama that's all the slicker for having a lighter side, a bit of a mess but a really fun mess...

Just the kind of role Carrey needed to stir up some controversy and deliver himself another chance to be seen in a slightly new light on the big screen.

Far too tragic to be funny and far too funny to be tragic.

Neither the filmmakers nor actor Carrey appear to be able to make any distinction between when Steve is full of baloney and when he's sincere.

... if you want to enjoy a comedy that handles a traditional little love story with tremendous cheek, do not miss I Love You Phillip Morris. [Full review in Spanish]

Audience Reviews for I Love You Phillip Morris

This film's humor is not for everybody (you see, I was the only one laughing out loud in a cinema full of people), and it has a story that could have been made into a depressing tragedy but is presented here as a light and delightful romantic comedy with great performances.

A daring movie that it's the best romantic stories that I ever saw. I Love You Phillip Morris is an unique fact-based romcom, that present a bold and one of the best performances by Jim Carrey. It's flaws when the movie show the lack of details about Steven Russell runways from jail. Anyway the film overcome by the comedy and the sweet couple: Steven and Phillip, role of Evan McGregor, that also present one of his best actings.

The recipe for a good Jim Carrey movie is simple: give his character a singular focus (see: Ace Ventura; Liar, Liar; Yes Man). Here, his character, Steve Russell, has a compulsive desire to give his dream partner - the titular Phillip Morris (Ewan McGregor) - absolutely everything, which drives him to commit con after con, trying always to keep the law off his tail, and Phillip Morris in love with him. Morris, of course, is played sweetly by McGregor, as the delicate partner who just wants them to be together, and the two leads have great chemistry overall. Plus, the jokes are just cynical - or failing that, raunchy - enough to keep you laughing. And, what I perhaps liked most about this movie, is that it talks to you as though you, too, are being conned; some viewers might not like the twist at the end, as it doesn't seem too well set up, but keep in mind: Russell is narrating this story. You didn't expect he'd tell you more than you need to know up front, now, did you? As the tagline says, and as a good con artist would tell you of his next lie: it's so incredible it has to be true. It all makes for a delightful, underrated surprise of a movie that, though it gets a little too heavy in the end, tells a fun and touching love story.

I Love You Phillip Morris Quotes