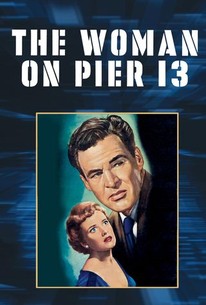 The Woman on Pier 13 (I Married a Communist) Photos

There's propaganda aplenty in RKO's I Married a Communist, the first of producer Howard R. Hughes's many anti-Red broadsides. Robert Ryan plays shipping executive Brad Collins, whose youthful flirtations with certain left-wing causes have made him ripe for plucking by Commie cell leader Vanning (Thomas Gomez). Threatening to reveal Collins' "pinko" past, Vanning orders the executive to deliberately sabotage the shipping industry in the Frisco Bay area. Other characters essential to the plotline are Collins' wife Nan (Laraine Day), who knows nothing of her husband's politics, and his idealistic brother-in-law Don (John Agar) who spouts Marxist dogma at the drop of a hat. Apparently at a loss as to how to depict communist villainy, the screenwriters hark back on the gangster films of the 1930s, notably in the scene where a hapless stoolie (the inevitable Paul Guilfoyle) is taken for a ride. When the title I Married a Communist proved an audience turn-off during previews, the film was rechristened The Woman on Pier 13.

Johnny Duncan
as Bellhop
View All

The sterling cast can make no headway against cartoon characters, a fatuous script that defies belief, and an enveloping sense of hysteria.

This is pure propaganda, heavy-handed and dull.

Only the gullible are going to fall for this one.

If you can somehow get by the polemics and the cheesy script and view this melodrama as typical Hollywood, the film is quite entertaining.

Obviously made during the height of the Cold War this drama is a tad highstrung but good acting puts it over. Any movie with Robert Ryan is worth checking out for him alone.

The Woman on Pier 13 (I Married a Communist) Quotes