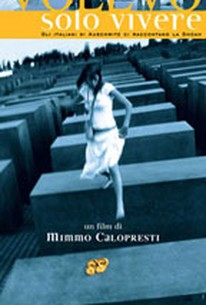 I Only Wanted to Live Photos

Where is Auschwitz? director Mimmo Calopresti draws on hundreds of hours of footage originally gathered by Steven Spielberg's USC Shoah Foundation to craft a decidedly personal study of the suffering endured by nine Italian Jews deported to Auschwitz during the Holocaust. From then-thirteen year-old Liliana Segre's failed attempt to escape across the Swiss border with her father to Schlomo Venzia's grim assignment at the crematoriums, Settima Spizzichino's horrific suffering at the hands of Josef Mengele, and Arminio Wachsberger's unfathomable loss, these are the kind of stories that transform a long-ago historic tragedy into an intensely personal reminder of the grisly fate that can befall mankind if we refuse to learn from our past mistakes.

Critic Reviews for I Only Wanted to Live

No matter how many Holocaust docus get made, there will always be a need for the individual, heartbreaking stories of the survivors, as evidenced by I Only Wanted to Live.

There are no featured reviews for I Only Wanted to Live at this time.

I Only Wanted to Live Quotes