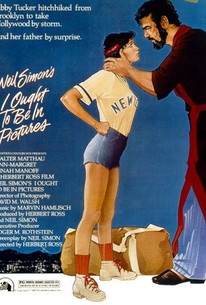 I Ought to Be in Pictures Photos

Neil Simon based his screenplay for I Ought to Be in Pictures on one of his more serious theatrical pieces. Walter Matthau is top-billed as Herbert Tucker, a struggling screenwriter who suddenly finds his 19-year-old daughter, Libby(Dinah Manoff), on his Hollywood doorstep. Having deserted his family years earlier, Herbert isn't keen on having his daughter around to cramp his lifestyle, which at this point consists of drinking his meals and telling lies to his faithful girlfriend, Stephanie (Ann-Margret). Libby takes it upon herself to put Herbert's life in order. There are plenty of angry outbursts and recriminations between father and daughter before the tearful, upbeat conclusion. Incidentally, Dinah Manoff is the daughter of actress Lee Grant, who'd previously co-starred with Walter Matthau in Neil Simon's Plaza Suite -- which, like I Ought to be in Pictures, was directed by Herbert Ross.

Michael Dudikoff
as Boy on the Bus

Critic Reviews for I Ought to Be in Pictures

I Ought to Be in Pictures is a slender but endearing Neil Simon comedy-drama, reflecting the human side of the prolific writer.

Simon's best dialogue revolves around genuine emotion. He's the only screenwriter dealing consistently with familial issues. He's working toward something more lasting than gags. Pictures is a step in that direction.

I Ought To Be In Pictures ought to be; it's a classy adaptation of a fine play that has the added advantage of a cunningly cloying Marvin Hamlisch music score to help open the tearducts.

The only unique virtue of screenwriter Neil Simon is to modernize characters of the conservative comedies of the 1920s and 1930s. [Full Review in Spanish]

Audience Reviews for I Ought to Be in Pictures

If I had a father in Hollywood who was a screenwriter that I hadn't seen in a couple years & there was maybe a chance he'd hook me up, I might move to Hollywood to.I watched this movie just because it had Walter Matthau in it & he was OK I guess but it wasn't all that great.I found Dinah Manoff's character to be annoying & whiny

I Ought to Be in Pictures Quotes