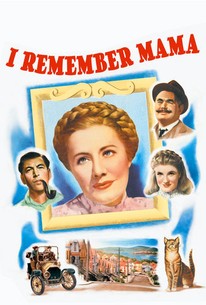 George Stevens's charming film version of Kathryn Forbes' collection of short stories entitled Mama's Bank Account features Irene Dunne as Mama in one of her finest and most ingratiating performances. The film is narrated by Mama's daughter Katrin (Barbara Bel Geddes), recalling the trials and tribulations of her family in turn-of-the-century San Francisco. Mama tries to keep her house in order and her family on their toes as a motley assortment of eccentric relatives, boarders, and friends -- including Uncle Chris (Oscar Homolka), Mr. Hyde (Cedric Hardwicke), Dr. Johnson (Rudy Vallee), Mr. Thorkelson (Edgar Bergen) -- weave in and out of their lives.

Peggy Kerbert
as Girl
View All

Critic Reviews for I Remember Mama

Above everything else, the picture has obviously been made with the lively affection and pleasure which are the life blood of good popular art.

A charmer, nevertheless, directed and acted with real delicacy.

Producer-Director George Stevens has transferred the John van Druten play, via a free-wheeling script by DeWitt Bodeen, in all its genial personality to the screen.

This chronicle of one immigrants clan in San Francisco circa 1900 is sentimental and nostalgic, but it's precisely directed by George Stevens and emotionally effective.

It's a quietly effective work, thanks to its strong sense of time and place.

the characters are portrayed warmly and with unusual realism

It inspired a classic TV show.

It's not just the turn-of-the-century setting that gives this warm-hearted film an old-fashioned feel, rather it's the values it celebrates.

Audience Reviews for I Remember Mama

You have to love this Irene Dunne performance here even if it borders on the overly sentimental. You hope that you have people around you that are as interesting as those who stop in to visit this San Francisco family.

don't really get why everyone loves this so much or else it's just far too sentimental for my tastes. the outlandish accents and gushing music put me off right away but i stuck it out for 2+ hours thinking there must be something...give me curtiz' 'life with father' any day

A really great family drama, a wonderful cast, and a good story. I really liked it.

A film along the lines of Pride and Prejudice, but this is a first generation immigrant family with four kids in early 20th century San Francisco. The story teller is the oldest daughter who has a yen for writing. We go through the various troubles they encounter - lack of money, the stay in a hospital when a kid needs an operation, the good and bad relatives, etc. It is a heart-warming movie, and if you get a chance watch it.