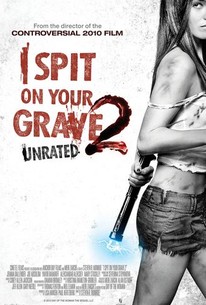 I Spit on Your Grave 2 Photos

A woman is brutally raped by four men, and she plans to seek vengeance. She tracks them down and has her revenge.

Critic Reviews for I Spit on Your Grave 2

By equating the victim with her attackers, the film fails to comment on sexual violence in a meaningful way that justifies its gross depiction.

A dreary affair that will thrill undiscriminating fans of torture-porn horror and nobody else.

There are glimmers of thoughtfulness here in the initial characterization of Katie and in her long, slow recovery before she can exact her revenge, but they're ultimately snuffed out by this mound of toxic trash.

panders to the viewer's basest instincts without even once interrogating them, and presents revenge as something entirely unproblematic. And when it's all over, we, like Katie, can just go home.

With I Spit on Your Grave 2, director Steven R. Monroe returns and reveals that everything he seemingly did right in his first remake must have been accidental, for this horrifically misguided sequel is everything you pray a movie like this would not be.

Welcome to the bottom of the barrel. Population: this movie.

You can't create a franchise using the ideas that surround I Spit On Your Grave, and this unnecessary sequel proves exactly why.

Audience Reviews for I Spit on Your Grave 2

The sequel to 2010's remake of I Spit On Your Grave, features a very similar storyline, however it takes torture and gore to whole other level. Unlike many Horror fans, I love blood and gore, but there has to be a line, and this film crossed it early and often. I've seen thousands of movies and a good portion of my collection is Horror, so I thought I'd seen it all, then comes this film. Using blood, puss, feces, and extreme genital mutilation, I Spit On Your Grave 2 is so extreme, that even I was wincing and turning away from the screen. The story is almost identical to the first, as a young woman is abducted, raped, tortured, and left for dead, but she survives and plans her brutal revenge. The first film took place in a cabin in the woods, while this one features a girl abducted by human traffickers and brought to Belarus. Other than the location and the extreme depravity, these films are nearly identical, yet the sequel gets two stars less than it's predecessor because it is much too long and it really is vile. I understand that Horror is a very hard genre to develop original ideas in, and I also understand that in order to stand out, one director is always trying to out do the other, but this movie is so beyond disgusting that it makes the Saw movies look like a Disney production. As for the cast, it is almost completely comprised of newcomers, and unlike the first there really isn't a whole lot of dialogue. Jemma Dallender stars, and while I appreciate that even pretending to have some of those things done to you must be rough, she really shows no personality. She's a victim from the second the film starts and transforms into a psychopath who simply repeats her captures lines to them as she tortures them back. The 2010 remake had a good story, was well thought out, and while it was pretty violent, it was within reason. I Spit On Your Grave 2 is nothing more than a snuff film, with scenes of things that people should never see. The first film was a must see movie, but as is often the case, you can really skip the sequel.

Awful pointless sequel that is not only extremely distasteful as it is awfully made, making such a squeamish subject into something almost laughable, which is almost unique in it's own right, to fail so miserably at it's "point"... Dreadful.

Sequel to I Spit On Your Grave is basically the same movie except it's in a different location. I felt that this was a mediocre follow up to a good movie. This film really had nothing new to offer and was pretty pointless. The performances, I felt were farfetched and the lead actress was overacting during the revenge part of the film. The sequences were well done, unfortunately this is a sequel that relies way too much on its previous film to create its tension, thus it doesn't really work and it becomes predictable and not that interesting. The 1978 film and its remake have criticized for its sheer use of unflinching violence, but there are far worst movies out there. Stick with the remake and the original if you're looking for the ultimate in Exploitation terror. This movie just suffers from a script relying on old ideas and ends up being a mediocre film. I didn't this film, and think it's fairly forgettable and if you've seen the original and remake, then you've seen this. However expect plenty of over acting, and by this type of film's standards that's saying a lot. The performances are not good and are easily forgettable. I really don't know why this was made, as a sequel for I Spit On Your Grave. That movie didn't warrant a follow up. There isn't anything worthwhile here, except for a few cringe worthy moments, including the rape scene. However this isn't worth your time. If this is your cup of tea, then by all means see it, but be warned, this is essentially the same movie as the 2010 version.

Whats even the point of making a sequel when there's no point apart from the fact its exactly like the first one just in a different place. It gets 1 and a half stars purely for the brutality of it again!

I Spit on Your Grave 2 Quotes