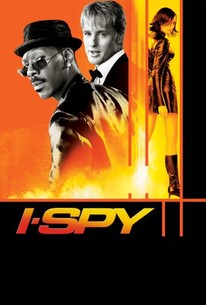 Critics Consensus: Insipid and mirthless, I-Spy bares little resemblance to the TV series that inspired it.

Critics Consensus: Insipid and mirthless, I-Spy bares little resemblance to the TV series that inspired it.

Critic Consensus: Insipid and mirthless, I-Spy bares little resemblance to the TV series that inspired it.

Special agent Alex Scott and middleweight world champion Kelly Robinson are reluctantly paired for a dangerous mission to recover the Switchblade, the U.S.'s latest and most technologically sophisticated reconnaissance aircraft. The prototype spy plane has fallen into the hands of a nefarious arms dealer, Arnold Gundars, who plans to sell it to the highest bidder - a rogue terrorist with access to nuclear warheads. After the U.S. government fails to retrieve the plane through the normal undercover channels, the president asks Robinson to provide civilian cover for agent Scott to find the stealth aircraft before the terrorist transforms it into a delivery system for weapons of mass destruction. Scott needs Robinson to penetrate Gundars' palatial headquarters in Budapest. An avid boxing fan, Gundars is staging a championship bout between the undefeated Robinson (57-0) and the reigning European titleholder. The real contest takes place outside the ring, however, between the cocky Robinson and the put-upon Scott. After a series of near disasters, the two men finally bond in the depths of the Budapest sewer system. Robinson, the womanizer, coaches the shy, insecure Scott in the art of seduction so he can woo Rachel, the beautiful agent who is on assignment with them. In turn, Scott introduces Robinson to the dazzling world of espionage and high-tech spy gadgetry.

Blake 'The Blade' Lirette
as Himself

Peter Linka
as Master of Ceremonies

News & Interviews for I Spy

View All I Spy News

Critic Reviews for I Spy

It's disposable dumb fun. And there's nothing wrong with that.

Though ample time is spent mingling Murphy's jabberjaw locutions and Wilson's curveball spaciness, the film leaves only the bitter reek of a botched chemistry experiment.

I really resent a movie like this that just looks like it's made by a committee when you have two such huge talents wasted like this.

It's a buddy movie with zero chemistry between its leads, and even the action set-pieces seem dated and deadly dull.

There's nothing groundbreaking, nothing important, nothing socially conscious here. It's just two very funny guys, a plot that makes no sense at all - and a whole lot of laughs.

Serves up the expected gags and set pieces in service of a thoroughly been-there, done-that plot line.

The problem with I Spy isn't so much that it's bad (which it is), but that it's wasteful.

Audience Reviews for I Spy

Get another field of view Not a very funny movie. The story really is weak and barely good action comes our way. I saw this film pretty much for Owen Wilson since i'm not a Eddie Murphy movie fan per se. Watch at own risk! When the Switchblade, the most sophisticated prototype stealth fighter created yet, is stolen from the U.S. government, one of the United States' top spies, Alex Scott, is called to action. What he doesn't expect is to get teamed up with a cocky civilian, World Class Boxing Champion Kelly Robinson, on a dangerous top secret espionage mission. Their assignment: using equal parts skill and humor, catch Arnold Gundars, one of the world's most successful illegal arms dealers, and foil his treacherous plans for the plane.

More another worthless picture by Betty Thomas and Eddie Murphy.

High School theater viewing, didn't like it at the time. Thought one scene was funny but was disinterested throughout. Watched it again recently and my opinion hasn't changed. Eddie Murphy is Chris Tucker in Rush Hour or Eddie Murphy in anything he has ever done.