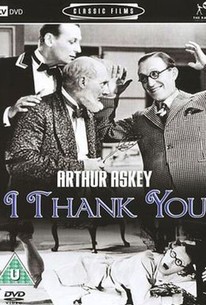 I Thank You Photos

In the late 1930s-early 1940s, diminutive British music-hall and radio comedian Arthur Askey enjoyed a popularity commensurate to that of Hollywood's Abbott & Costello; accordingly, Askey's earliest starring films were all box-office bonanzas. In I Thank You, Askey and his perennial straight man Richard Murdoch are cast as Arthur and Stinker, members of a nearly bankrupt theatrical troupe. To raise some much-needed money, our heroes hire on as servants for Lady Randall (Lily Morris), who'd been an entertainer herself before marrying into the Upper Crust. When Lady Randall learns of Arthur and Stinker's plight, she bankrolls a major stage production for the boys' fellow performers, leading to the inevitable big-production-number finale. Way, way down the cast list of I Thank You is distinguished Shakespearean actor Felix Aylmer, who was seen to rather better advantage as Polonius in Lawrence Olivier's Hamlet.

Issy Bonn
as Himself

Seamon and Farrell
as Themselves
View All

Critic Reviews for I Thank You

There are no critic reviews yet for I Thank You. Keep checking Rotten Tomatoes for updates!

There are no featured reviews for I Thank You at this time.

I Thank You Quotes