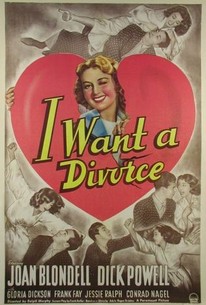 I Want a Divorce Photos

Ironically, the marriage between Dick Powell and Joan Blondell was beginning to fall apart at the time they co-starred in Paramount's I Want a Divorce. The film manages to sustain two plotlines, with newlyweds Alan and Geraldine MacNally (Powell and Blondell) beginning to have second thoughts about their union, while David and Wanda Holland (Conrad Nagel and Gloria Dickson) are in the last stages of their divorce proceedings. It so happens that Alan is the struggling attorney handling the Holland case, much to his wife's chagrin. As the hearings proceed, Alan and Geraldine drift further and further apart, only to abruptly reunite when Wanda Holland's suicide after losing custody of her son forces Alan to rethink his own priorities. Often written off as a mere comedy, I Want a Divorce has a surprising amount of meat on its bones. ~ Hal Erickson, Rovi

Charles McAvoy
as Captain of Detectives

Critic Reviews for I Want a Divorce

Miss Blondell and Mr. Powell have been persuaded to hit the old high pace when playing their lighter scenes. Some of these are amusing, but they simply don't sandwich into the whole. And, when the story goes heavy -- well, confidentially, it sinks.

Overall, it's satisfactory entertainment for the adult trade, despite bump tempo in pace, and the sudden swing from light marital comedy in the middle to a rather tragic dramatic conclusion.

With moments of strong drama, the picture is entertaining comedy, acted by a very competent cast.

I Want a Divorce has many good angles, considerable humour, some substantial emotional colour, but not enough strength. It entertains but fails to convince.

The humor and freshness of their early scenes get under the skin: when the film swings surprisingly, from comedy to deep drama, and the women in the audience get out their handkerchiefs, Joan and Dick keep in full charge of their roles.

Excellent both in quality and as entertainment.

Frank Butler, who wrote the screenplay, and Director Ralph Murphy have managed to contrive a neat and not a bit gaudy motion picture, in which people behave. strangely enough, just as such people might behave.

There are no featured reviews for I Want a Divorce at this time.

I Want a Divorce Quotes