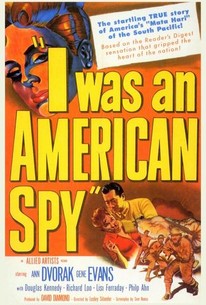 I Was An American Spy Photos

Ann Dvorak delivers a bravura performance in Allied Artists' I Was an American Spy. Dvorak portrays real-life American heroine Claire Phillips, who after her husband perishes in the Bataan death march offers to work as an espionage agent on behalf of the U.S. army. She poses as an Italian nightclub owner and sets up shop in Japanese-occupied Manila. In this guise, she provides invaluable information to her American contact (Gene Evans). Eventually found out, Mrs. Phillips is subjected to the most heinous forms of torture, then sentenced to death by firing squad. It is giving nothing away to reveal that, at war's end, Claire Phillips received the Freedom Medal from her grateful government. Film connoisseurs consider I Was an American Spy to be the best non-western effort from director Lesley Selander.

James B. Leong
as Ho Sang

Jack Reynolds
as US Sergeant

William Tannen
as US Army Captain
View All

Critic Reviews for I Was An American Spy

There are no featured reviews for I Was An American Spy at this time.

I Was An American Spy Quotes