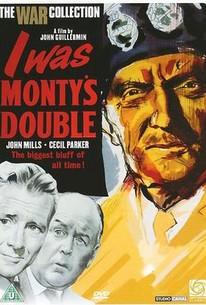 I Was Monty's Double Photos

If official documentation didn't exist, we'd never believe a fantastic yarn like I Was Monty's Double. Actor M.E. Clifton James plays himself, a British stock-company actor who becomes an unsung hero during World War II. It seems that James, serving his country as a junior officer, is the exact double of General Montgomery. Major John Mills trains James to impersonate Montgomery to the last detail, then sends the actor on a tour of North Africa, the better to divert the German's attentions away from the real "Monty." Based on James' own written reminiscences, I Was Monty's Double was released in the U.S. under the baffling title Hell, Heaven or Hoboken!

Michael Hordern
as Governor of Gibraltar

Patrick Connor
as Soldier in Tent

Critic Reviews for I Was Monty's Double

Clifton James, an English actor who hoaxed the Germans by impersonating General Montgomery just before the Allied invasion of Europe, does it again in this brisk, funny and entertaining British thriller.

It has something to say about impersonation, about character and confidence; it shows us a man un- cannily like Monty in appearance who could hardly have been more unlike him by nature.

While he's hardly a dynamic presence in the film, [Meyrick Clifton] James offers a convincing self-portrait of a minor actor terrified at the scale of the role.

There are no featured reviews for I Was Monty's Double at this time.

I Was Monty's Double Quotes