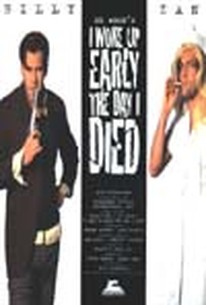 Aris Iliopulos directed this campy comedy utilizing schlock filmmaker Ed Wood's last unproduced screenplay. Stock footage and old hygiene films are intercut with this near-silent story following a cross-dresser (Billy Zane), who escapes from the Casa de la Loco Sanitarium, manages to acquire some money, and then loses it at a funeral attended by eccentric mourners. He then seeks them out, killing them one by one. Some script instructions appear as titles. Bud Cort makes an uncredited appearance, and Wood aficionados can spot Kathy Wood (the filmmaker's daughter) in a walk-on, while Maila Nurmi re-creates her famed Vampira characterization. Larry Groupe's punk score alternates with standards by Nat "King" Cole and others. Shown at the Toronto Film Festival.

Billy Zane
as The Thief

Will Patton
as Preacher

Summer Phoenix
as Bartender #2/Girl at the Beach

Steven Weber
as Policeman in Alley
View All

Critic Reviews for I Woke Up Early the Day I Died

Wood's bargain-basement aesthetic is impossible to parody. That this mime show works better than it should is, in a sense, the ultimate dis.

It's sad and misguided and boring. Pretending to make a pathetically amateurish movie isn't nearly as effective as accidentally making one because you don't know any better.

I can recommend three more enjoyable alternatives: counting the number of hairs on the back of your forearm, practicing breaking a cinder block in half with your bare hand, or submitting to a colonoscopy.

As funny as a funeral.

Nothing could be more lethal to a Wood script than actors who not only think they're hipper than what they're trying to do, but who also make sure that the audience knows it.

Like all of the films Ed Wood directed, this new movie is a pure and simple dud.

hough the film is distinctive, its unique style wore thin after about 20 minutes, and as it progressed, watching became a chore.

Not funny enough to deserve a good rating.

What redeems the whole enterprise is the affection that paradoxically comes through from its director, who obviously has tender memories of Mr. Wood.

Audience Reviews for I Woke Up Early the Day I Died

I've never seen a filmmaker so proud of himself for making crap as when I saw this at TIFF. The wonderful thing about Ed Wood was he was genuinely trying to make a good film whenever he made a turkey, and it really showed and made his films really endearing, almost sweet. This turkey is made by a bunch of people who think they're better than the material... guess what, they're not.

I Woke Up Early the Day I Died Quotes